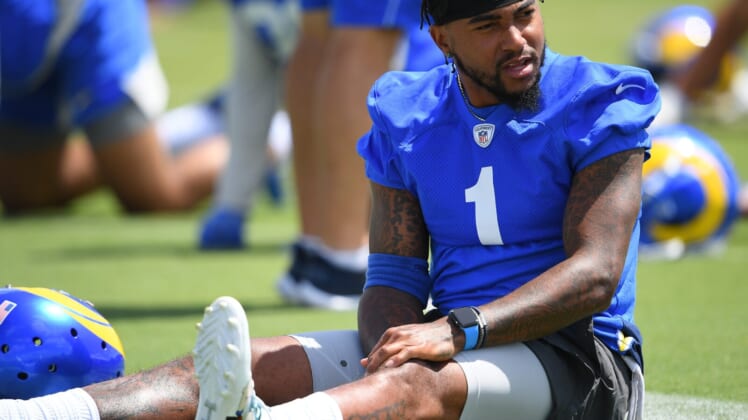 As the Raiders turn the page on wide receiver Henry Ruggs, Las Vegas continues to look for versatility at the receiver position.

Throughout his career, DeSean Jackson has been a deep-threat receiver who could easily replace the type of player Ruggs was during his time in the Silver and Black.

DeSean Jackson and his recent history

Jackson returned to play near his hometown on a one-year deal for the Los Angeles Rams during this past offseason. In seven games this season, the Long Beach, Calif. native recorded eight receptions on 15 targets for 221 yards and a touchdown.

More than half of his yards and his lone touchdown came during one game this season. In the third game against Tampa Bay, Jackson recorded three receptions on five targets for 120 yards and a touchdown in a 34-24 victory for the Rams.

DeSean Jackson’s touchdown went for 75 yards on third-and-10 at Los Angeles’ 25-yard line. Quarterback Matthew Stafford found Jackson on a deep play right with no one in between him and the endzone. In addition, out of all the people who first came to celebrate Jackson’s extended score, it was head coach Sean McVay.

The 5-foot-10 receiver spent time with Philadelphia on two separate occasions. He was a second-round draft pick by the Eagles in 2008 and made his NFL debut that season, where he played in all 16 games with 15 starts. During his rookie season, he recorded 62 catches for 912 yards and two touchdowns. He also saw production with his legs, recording 17 carries for 96 yards and a touchdown.

During his career, DeSean Jackson led the NFL in yards per reception four times, with the latest coming in 2018 with a clip of 18.9 yards for every catch.

The 34-year-old spent his first six seasons in the City of Brotherly Love, where he recorded three 1000-yard receiving seasons in 2009, 2010 and 2013. In each of those three seasons, he was also named to the Pro Bowl.

Jackson’s most touchdowns in a season are 12, which happened in 2009 when Jackson recorded nine through the air, two on punt returns and one on a rushing touchdown.

After spending three years with Washington and two with Tampa Bay, DeSean Jackson returned to the Eagles for the 2019 and 2020 seasons, where he played in a combined eight games across two seasons for Philadelphia.

In total, Jackson has recorded five 1000-yard seasons, with the latest coming with Washington in 2016.

When DeSean Jackson officially signs with Raiders, the 14-year NFL veteran will be a critical voice among a young receiving core with players such as Zay Jones, Hunter Renfrow, and rookie Dillon Stoner, who was just signed off the practice squad before Sunday’s game against the Giants. All struggled to replace the productivity of Ruggs in the loss at New York.