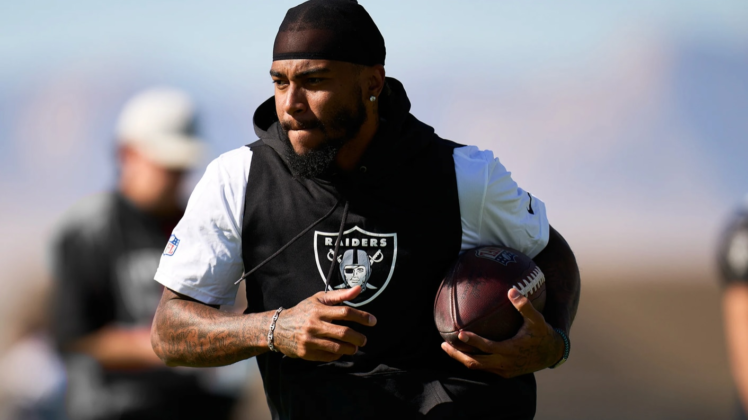 The Raiders DeSean Jackson, the veteran wide receiver who signed with Las Vegas on Monday, is quickly learning and adapting to the Raiders playbook.

With Wednesday marking the first team practice of the week for the Raiders, the one thing that stood out was Jackson’s speed on the practice field.

“He’s worked hard over the last two days meeting with Edgar and Nick Holz,” Bisaccia said of the Raiders DeSean Jackson. “I thought him and the receivers really had a good practice today. (We) put him in a couple different spots, see if we can get some packages worked out, but I thought he had some fun out there and looked fast.”

Over the last few days, the Raiders DeSean Jackson said he has been learning the Silver and Black playbook, including the set of plays he will have on Sunday with assistance of coaches and teammates, such as quarterback Derek Carr.

“Definitely a different system, but at this point, we’re going to have a package for me,” Jackson said. “Certain plays, I’ll be able to get in there and play fast. Derek Carr, the young guys, they’re all helping me and it’s been a smooth process.

“I know the first day was today, but since Monday, I got in here and got a jumpstart on the offense and taking the steps. I’m definitely comfortable that DC, all the guys around, will make it comfortable when I get out there. So, it makes it a lot better.”

Carr, who had not talked to Jackson since training camp when the Raiders practiced with the Los Angeles Rams, is beginning to build the trust and relationship with the three-time Pro Bowler as the season nears the midway point.

The 6-foot-3 play-caller said he was excited to see what the Raiders DeSean Jackson could do in their first practice together.

“With what he was able to today, it was impressive,” Carr said. “From a chemistry standpoint, you have to get reps. You have to learn how someone cuts, how they like speed cuts, are they one-two at the top. There’s a lot of a different things this game is a difference of (very small).

“Hopefully, it doesn’t take too long. We don’t have too long. We are almost to the halfway point of this 30-game season, or whatever it is. But you look at it, and you say, ‘with a guy like that, with his understanding of coverage,’ I don’t have to go out there and teach him anything. He already knows what I’m thinking.”

Carr said he thought the Raiders bringing in Jackson was a big add and will only benefit the team moving forward as the season progresses with his veteran presence.

The NFL experience the Raiders DeSean Jackson has will benefit younger players such as wide receivers Bryan Edwards, Zay Jones and Hunter Renfrow.

As Jackson continues to adapt in the wide receiver room, Carr said Jackson is like any person starting a new job with a new work environment.

“He’s quiet to himself right now as he’s trying to fill out things, just as anyone in a new room,” Carr said. “But you can definitely tell in our quarterback-receiver meeting that we always do after practice, the questions he’s asking.

“‘When do you want me here? Can I run it like this? Can I do it like that? Are you OK if it’s like this? What do you want on this?’ The level of questions he’s asking only elevates the younger guys in that room that can latch on. Hopefully he has success because then they’ll see those questions and that building of things will only be in their head.”

The 34-year-old, who will turn 35 in a few weeks, said he hopes to take a similar role that Henry Ruggs had but in a job that best fits him and the team.

“Unfortunate situation with Ruggs, so not saying filling that role, but being that spark what I’ve been able to do my whole career,” Jackson said. “Deep threat, vertical threat and having a defense account for that. If it’s being a decoy, opening it up for other guys like Hunter, Waller, whatever it is I need to do to be a spark, that’s what I’m here for.”

The Raiders DeSean Jackson and his new teammates take on the Chiefs on Sunday Night Football inside Allegiant Stadium. Kickoff is set for 5:20 p.m. and will be televised nationally on NBC.