Raiders: Why DeSean Jackson is a better fit than Odell Beckham Jr. 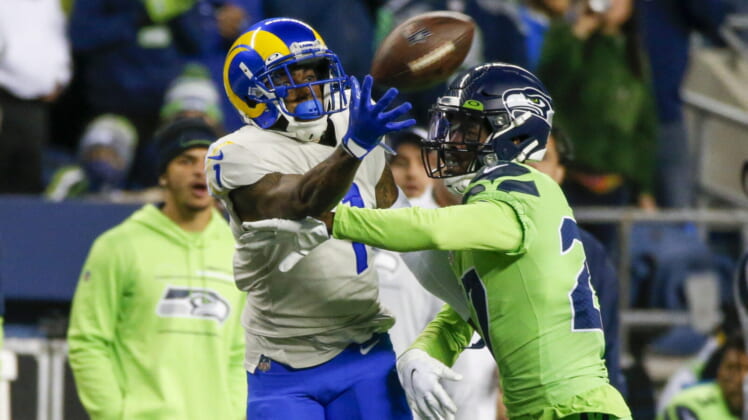 Ruggs has to come to terms with his careless decisions while going through the legal system. On Wednesday, interim head coach Rich Bisaccia and quarterback Derek Carr expressed their deepest sympathies to the family of Tina Tintor, who lost her life as a result of the crash.

With heavy hearts, the Raiders will attempt to focus on the remainder of the season.

The Raiders may look in-house to replace Ruggs. Bisaccia said the team has “high expectations” for Zay Jones, who caught the game-winning touchdown in overtime against the Baltimore Ravens in Week 1. He also hauled in a 43-yard reception in Week 7 against the Philadelphia Eagles.

The front office may explore other options in DeSean Jackson, who’s on waivers and would land with a team that put in a claim for him by Thursday 4 p.m. ET. Otherwise, he’ll become a free agent. Vegas may also take a look at Odell Beckham Jr., who’s at odds with the Cleveland Browns. According to NFL Insider Mike Silver, head coach Kevin Stefanski told his players that the star wideout “is essentially not on the team right now.”

Beckham’s dad posted a video on Instagram criticizing Browns quarterback Baker Mayfield for not throwing to his son on several occasions. This likely factored into why the team excused the wideout from Wednesday’s practice and told him to stay home.

The NFL trade deadline passed on November 2nd, so if the Raiders want Beckham, they must wait for the Browns to waive him. All players are subject to waivers after the trade deadline, which is why Jackson, a 14-year veteran, isn’t a free agent after the Los Angeles Rams let him go on Tuesday. The waiver system is set by the current standings with teams that have the worst records getting first dibs on players.

If the Raiders chose between Beckham and DeSean Jackson, the latter would make a better fit, and here’s why.

For weeks, Beckham has battled injuries in both shoulders. He’ll attempt to play through the discomfort for the remainder of the season, per Cleveland.com’s Mary Kay Cabot.

“Browns receiver Odell Beckham Jr. is playing through significant injuries to both of his shoulders, but plans to try to get through the season without surgery on either of them,” Cabot wrote.

According to CBS Sports’ Josina Anderson, Beckham has a Grade 3 AC joint sprain.

Skeptics may think Beckham has feigned the injuries because he doesn’t want to play in Cleveland. Well, if you look at a couple of game clips, the wideout’s pain and anguish seem legitimate after he landed on his shoulder in Week 6 against the Arizona Cardinals and Week 7 against the Denver Broncos.

Beckham could see a significant boost in production with the Raiders because Derek Carr is a much better passer than Mayfield and that gap widen this year with the former’s aggressive playing style.

However, Vegas would have a banged-up version of Beckham, who may be one awkward fall away from injured reserve. That’s a risky acquisition. Say what you want about DeSean Jackson’s age, but he’s healthy right now.

Ruggs’ speed opened up intermediate passing lanes and stretched defenses over the top. He averaged 19.5 yards per reception. At 34 years old, DeSean Jackson provides the same skill set. Beckham brings speed, but he’s more of a threat to pick up yards after the catch than 20 yards downfield on a vertical play over the top.

Take a look at the average depth of target for both receivers (ADOT). So far this season, Jackson leads the league at 23.1 yards while Beckham is tied for 17th at 13.9 yards among pass-catchers with approximately 1.5 targets per game. Ruggs ranked sixth in this category at 16.9 yards.

Mayfield has average arm strength, so Beckham’s ADOT would likely increase with Carr, but the Rams used DeSean Jackson as a big-play specialist:

At least three to four times per game, Carr can force defenders to play on their heels with deep shots to Jackson, who’s led the NFL in yards per reception four times (2010, 2014, 2016 and 2018). He’s averaging a whopping 27.6 yards per catch this season.

DeSean Jackson is a much cheaper option

This past offseason, DeSean Jackson signed a one-year, $4.5 million contract with the Rams. As a free agent, he would command a modest deal. If the Raiders claim him, they would take on the remaining balance of his contract, which is far less than the price to land Beckham.

According to ESPN’s Field Yates, if the Browns waive Beckham, he would cost his next team a little more than $8 million for the remainder of the season:

With a win-now mentality and about $3.8 million in cap space, the Raiders may prefer the cheaper option to fill a void in the deep passing game. While both Odell Beckham and DeSean Jackson provide speed, the latter is more of a vertical threat, who’s not clearly hampered by injuries, and cost much less on the books.

Lastly, would Bisaccia really want to address a dad criticizing a quarterback for not throwing to his son with everything going on in the Raiders’ season? Probably not.