Raiders depth will face its first test in Steelers matchup 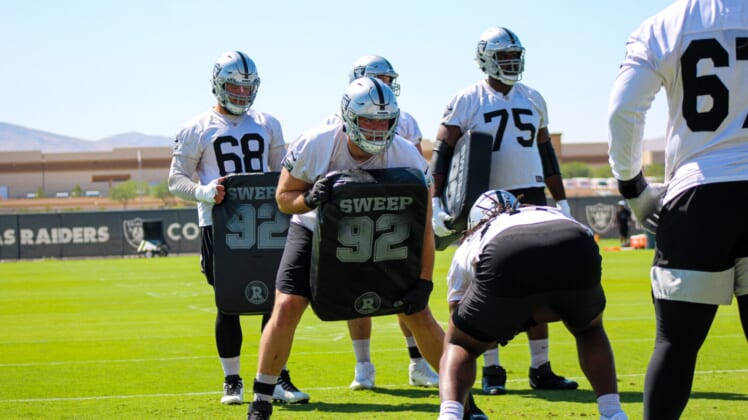 Less than 24 hours after a thrilling 33-27 overtime win over the Baltimore Ravens, head coach Jon Gruden seemed pleased but not jovial at the podium. In the back of his mind, he probably thought about the potential losses across the roster and the Raiders depth.

On the third play of Monday’s game, quarterback Marcus Mariota ran 31 yards and reaggravated a quad injury. He’ll miss “multiple weeks,” per NFL Network’s Ian Rapoport. The Raiders depth at several position became the story of the week in Henderson.

Vegas’ pass rush had its best showing in years with AFC Defensive Player of the Week Maxx Crosby and Yannick Ngakoue at the forefront of the charge, but the latter stood on the sideline with a hamstring injury down the stretch. He did log a limited practice Wednesday. Still, despite the better play on defense under new defensive coordinator Gus Bradley, the Raiders depth on defense will get tested early yet again.

Josh Jacobs played through illness and injury in a gritty performance; he scored two touchdowns inside the red zone. The third-year running back didn’t practice Wednesday.

Linebacker Nick Kwiatkoski (concussion) and defensive end Carl Nassib (pectoral/toe), who forced a crucial fumble in overtime to set up the game-winning drive, missed the first day of practice as well.

Some of these players will suit up Sunday against the Pittsburgh Steelers, but the Raiders have to put some faith in their depth to win this contest.

Fortunately, Jermaine Eluemunor held his own in Good’s place. According to The Athletic’s Vic Tafur, Richie Incognito will miss consecutive games with a calf injury, so John Simpson and Eluemunor project as the starters at guard.

In a physical matchup, the Raiders must establish the run, which is a staple in Gruden’s offense. Las Vegas struggled to move the ball on the ground Monday. After Mariota’s long run, the club rushed for 51 yards on 20 carries.

Simpson and rookie tackle Alex Leatherwood allowed a combined nine quarterback pressures, per Pro Football Focus (subscription required), but they looked far better on run-blocking downs. If defensive end Cameron Heyward and edge-rusher T.J. Watt put the Raiders’ young linemen on their heels, Gruden should play to the strengths of his new starters and run the ball at a high frequency.

The Raiders became the subject of criticism when they signed running back Kenyan Drake, but they’ll need him as Jacobs battles through toe and ankle issues. The Raiders depth at running back suddenly looks like a stroke of brilliance.

In his Raiders debut, Drake caught five passes for 59 yards and sealed key blocks down the stretch (h/t Chris Reed of RaidersBeat). Even if Jacobs isn’t 100 percent, Drake can carry the bulk of the workload with Peyton Barber as a complementary option.

Defensively, the Raiders must replicate their dominance at the line of scrimmage. Like the Ravens, the Steelers have a remodeled offensive line that includes four new starters—two rookies at left tackle (Dan Moore Jr.) and center (Kendrick Green).

Crosby put together a phenomenal Week 1 performance, though the Raiders shouldn’t expect him to win battles in the trenches alone. If Nassib plays through his injury, he can fill a void in case Nagkoue doesn’t take the field. However, Vegas has a bigger elephant in the room who didn’t suit up Monday.

Clelin Ferrell will likely have an opportunity to turn the page on his healthy scratch in Week 1. Though he was listed as a surprise inactive, some offseason clues hinted at a rough start to his third season.

At the beginning of training camp, Tafur wrote that Ferrell “might” have a hard time earning snaps with the addition of Ngakoue and Solomon Thomas. Though Gruden said the defensive end dealt with back issues leading up to the season opener, Ferrell didn’t appear on the injury report, which means he could’ve played Monday.

Remember, the Raiders selected Malcolm Koonce in the third round of this year’s draft. He was a Raiders depth draft selection. Thomas played 15 snaps against the Ravens. Nassib made a key play that put the Raiders in a position to win the game. If Ngakoue returns, where does that leave Ferrell?

Gruden said Ferrell will “probably” play this week, but the Clemson product must make this game count in a big way, or else he could be the odd man out for stretches this season.

If not on the edge, Ferrell can push the pocket on the interior, but he’ll compete for snaps in the 3-technique spot with Quinton Jefferson, who forced a fumble Monday, and Darius Philon.

“He’s unique because he can play right end, he can play left end, he’s a good run defender,” Gruden said to reporters. “I think his best pass rush might be inside — and you saw that against the Jets when we allowed him to do that last year.”

Well, with the Raiders in need of patchwork across the defensive front, Ferrell needs to step up and carve out a role for himself. It’s not only important for his future in the Silver and Black, but also for the Raiders depth as the season is a long one and the “next man up” philosophy is a reality in the NFL.