Raiders Defense: Ranking the top 5 players with the most impact in 2021 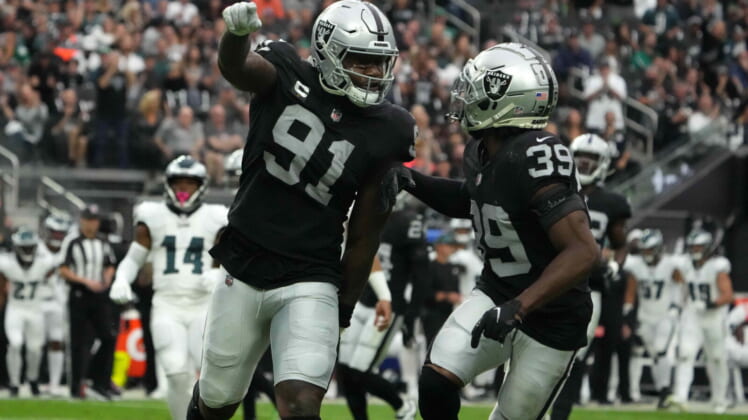 Las Vegas Raiders fans have waited nearly two decades for a decent defense that doesn’t have to rely on takeaways to get off the field like the 2016 team that forced the second-most turnovers. Well, defensive coordinator Gus Bradley put a system in place that allowed the players to grant that wish and the Raiders defense has helped this team go into the by week at an impressive 5-2.

The Raiders defense ranks 19th in scoring and 14th in yards, but those basic metrics don’t tell the whole story. The unit is tied for second in quarterback pressures and ranks 10th in third-down conversion percentage, underlining two significant improvements.

The Raiders defense doesn’t bleed out on long drives. They’re able to make timely stops, which gives the offense more possessions. Equally important, the unit has waves of pass-rushers from the interior to the edge. Opposing quarterbacks cannot just stand back in the pocket and pick apart the secondary.

Bradley’s Raiders defense still has work to do, explicitly patching up the 28th-ranked run defense and tightening up inside the 20-yard line where the club has surrendered touchdowns on 15 out of 18 red-zone trips (31st leaguewide).

With that said, we can see the growth, development and impact of new acquisitions on all three levels of the Raiders defense through seven games.

Who’s made the most significant contributions on that side of the ball? Let’s rank the top five with an honorable mention for the most improved player on defense.

Brandon Facyson would’ve earned this spot with bigger sample size. He’s only taken the field for 25.8 percent of the defensive snaps but made a significant impact over the last two games, logging five pass breakups, which leads the team, and an interception. The 27-year-old cornerback has served as a quality replacement for cornerback Trayvon Mullen, who’s on injured reserve with a foot injury. He’s been a pivotal addition to the Raiders defense over this mini two-game winning streak before the bye.

Nevertheless, Johnathan Abram is arguably the most improved player on defense. He’s no longer the culprit for head-scratching plays and blown assignments on the back end. Also, the third-year pro’s missed tackle rate has dropped from 13.1 percent in 2020 to 10 percent through seven games.

Lining up mainly in the box and the slot, Abram has shown the ability to cover shallow pass routes without giving up excessive yardage. He’s allowing just 7.5 yards per reception and an 87.5 passer rating. Thus far, Abram has played every defensive snap, so clearly, the coaching staff trusts him in any down-and-distance situation, which says a lot about his growth.

The Raiders acquired Denzel Perryman from the Carolina Panthers after linebackers Nicholas Morrow and Javin White went on injured reserve with injuries. With the regression of Nick Kwiatkoski, Perryman has become the man in the middle to take on lead blockers and track down pass-catchers on short routes.

The Raiders needed a defensive centerpiece who could read, diagnose and sniff outplays without hesitation. Perryman checks those boxes with enough speed to cover the length of the field.

Nate Hobbs is one of a few Day 3 steals from this year’s draft. During the preseason, he won the slot cornerback job. He looked like a polished veteran at a challenging position that requires players to handle cornerback and linebacker duties with assignments in coverage and against the run.

Hobbs lists fourth on the team in tackles (32) with only one missed attempt on a takedown. Even more impressive, he’s played the second-most snaps (246) without giving up a touchdown, per Pro Football Focus.

Hobbs transitioned from a boundary cornerback at Illinois to the slot, so he’s proved himself as a quick study and an invaluable high IQ defender. Because of his coverage skills, Hobbs ranks higher than Perryman on the impact meter.

Skeptics questioned the addition of Yannick Ngakoue because he had bounced around three teams in two years before he signed with the Raiders this past offseason. Thus far, he’s answered concerns about his commitment and potential impact.

According to Pro Football Focus, Ngakoue ranks eighth in quarterback pressures (32). He earned AFC Defensive Player of the Week for Week 7 with four tackles, two for loss, two sacks, and two pass breakups against the Philadelphia Eagles. That’s the second time he’s recorded a two-sack performance this season.

Because of Ngakoue’s track record with at least eight sacks in each of his first five campaigns, we shouldn’t be surprised to see him and Maxx Crosby form a pocket-wrecking duo.

Casey Hayward Jr. ranks a slot higher than Ngakoue on the impact list because, without him, the Raiders would’ve had to rely on Damon Arnette, who hadn’t shown much improvement before he went on injured reserve with a groin injury. The 10th-year pro provides lock-down coverage on the boundary.

Hayward allows a 47.8 percent completion rate and a 61.7 passer rating in coverage. He’s played the most snaps (258) without giving up a touchdown. The 32-year-old has a lot left in the tank.

Hayward has played a significant role in the Raiders’ ninth-ranked pass defense, which also helps the pass rush as quarterbacks struggle to find easy completions on one side of the field.

No surprise here. Crosby has played at an All-Pro level. He became the AFC Defensive Player of the Week for Week 1 and wrecked the Denver Broncos’ offensive game plan with a three-sack performance in Week 6. According to Pro Football Focus, he leads the league in quarterback pressures (47) and pass-rush win rate (27.3 percent) among players with at least 10 pass-rushing snaps.

After a 10-sack rookie campaign and playing through a torn labrum and a broken metal plate in his hand last year, Crosby is quickly becoming a household name with an early third-year breakout. As the Raiders defense gains respect, we’ll see more graphics illustrating his dominance as a pass-rusher.

Crosby’s growth in a leadership role adds to his impact on the Raiders defense—players feed off his energy and have the opportunity to make more plays near the line of scrimmage because he demands so much attention on the edge.