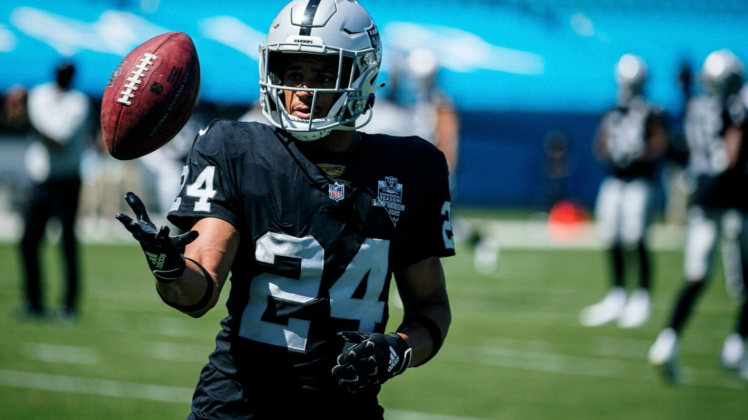 The Las Vegas Raiders defense got a whole lot faster and versatile with the additions of two top linebackers and young bucks on the back end. But can the Raiders defense stop a stocked, but depleted Saints offense?

At the forefront of the Las Vegas Raiders defensive shortcomings, the unit has struggled against tight ends and pass-catching running backs regardless of the coordinator. We could see a difference in the way the Raiders defense approaches those positions Monday night against the New Orleans Saints.

According to NFL Network’s Tom Pelissero, the Saints expect wide receiver Michael Thomas to miss multiple weeks with a high ankle sprain, which leaves a lot of responsibility to running back Alvin Kamara, tight end Jared Cook and wideout Emmanuel Sanders on offense.

Let’s assume cornerback Trayvon Mullen matches up against Sanders on the perimeter while Lamarcus Joyner takes him on in the slot. They cannot allow the 11th-year veteran to go off for 100-plus-yards. Beyond that, the Raiders defense has to prepare for Kamara and Cook, who are versatile playmakers. The linebackers and safeties must prepare themselves for a chess match.

Fortunately, the Raiders made multiple investments in the linebacker position, completely revamping the group. According to NFL Network’s Ian Rapoport, the team awaits word on Nick Kwiatkoski’s injury:

Nonetheless, Cory Littleton will handle most of the coverage duties in the middle of the Raiders defense. Safety Johnathan Abram can also line up in the box. In a joint effort, both players can come up huge in an attempt to neutralize Kamara and Cook.

Head coach Jon Gruden knows what the Saints can do with Cook, who led the Silver and Black in receiving yards (896) and touchdowns (six) for the 2018 campaign. He can line up on the line, out wide or in the slot.

Here’s a look at where Cook lined up in Week 1 against the Tampa Bay Buccaneers, per Pro Football Focus (subscription required):

While Littleton mans the middle of the field for the Raiders defense, Abram can cover any blind spot across the defense, tracking the ball with speed and decisiveness. Defensive coordinator Paul Guenther used him in a variety of ways against the Carolina Panthers. Take a look at his position snaps for Week 1, per PFF:

Cook could become the focal point of the Saints passing attack because he has more experience with quarterback Drew Brees than Sanders, who just signed with the team in March.

Littleton can shadow Cook or pass him off to Abram if he goes deep downfield. Guenther’s Raiders defense could also switch up the man coverage, allowing either of the two defenders to match up against Cook one-on-one.

As for Kamara, the Raiders defense must treat him similar to Panthers running back Christian McCaffrey. Although the Saints tailback took most of his snaps out of the backfield against the Buccaneers, he’s recorded 81 receptions in three consecutive seasons. Littleton has to prepare himself for short passes to the flat and screens.

If the Saints rely on their ground attack, Abram can step into the box and shoot up to the line of scrimmage for stops. He flew all over the field throughout the season opener, leading the defense in tackles (13), which included nine solo takedowns and one that resulted in a loss of yardage.

Brandon Thorn of Establish the Run highlighted the play when Abram stuck the tackle for a loss on McCaffrey:

Abram isn’t just a heavy hitter. For the most part, he wraps up and takes down ball-carriers and receivers. This sounds fundamental, but the Raiders defense cannot allow Kamara to slip away because of poor tackling. Last season, he averaged 2.3 rushing yards after contact and tied for the third-most broken tackles (29) while battling a leg injury “at 75 percent” in 2019.

In their second outing, the Raiders have to make clean stops to avoid giving up unnecessary yardage to Kamara, who’s tough to bring down and dangerous in space. As a team, the Silver and Black missed the second-most tackles (16) in Week 1. Fortunately for them, the Panthers whiffed on just as many tackles.

Assuming the coaching staff addresses that issue, the Raiders should be ready to take on Kamara head-on with the speed and versatility to match up with Cook on the back end. This could become a statement game for both Littleton and Abram.