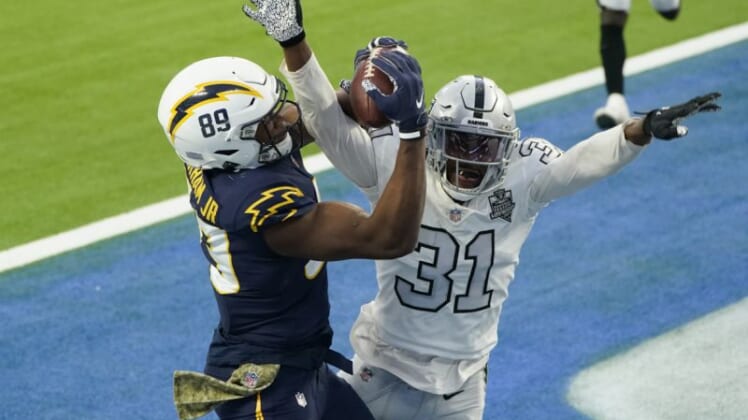 Cornerback Isaiah Johnson was the story of the game as he had two clutch pass breakups in the final 10 seconds as the Raiders defense secures the victory.

The Las Vegas Raiders improved to 5-3 thanks to a photo-finish win over the Los Angeles Chargers 31-26 at So-Fi Stadium. The Raiders defense, which has struggled all season, came through when it mattered most to secure the win for Las Vegas.

The Raiders knew they would have their hands full dealing with rookie quarterback Justin Herbert, and while he did carve through the Raiders defense, it was Las Vegas that would have the last laugh.

The Raiders pass rush has been a weak point all season but they started to show a few flashes in the big victory. Carl Nassib and Maxx Crosby grabbed a sack apiece, and oft-criticized Clelin Ferrell was very disruptive at points as he had four quarterback hits of his own.

Safety Johnathan Abram was blitzed quite often, though he never managed to get home, and this game was definitely a step in the right direction for a pass rush that has looked lifeless. The Raiders defense made small strides throughout but struggled in the usual areas.

Both Kwiatkoski and Johnson made some very big plays that ended up deciding the game. Kwiatkoski was noticeable all game as he racked up 10 solo tackles but it was on a crucial fourth-quarter Charger two-point conversion attempt when he made his biggest play, stopping backup quarterback Tyrod Taylor short of the endzone.

But it was Isaiah Johnson who stole the show with two pass breakups in one-on-one coverage to save the game with under ten seconds remaining. The second breakup was ruled a touchdown as time expired. But upon further review, the ball hit the ground and the pass was ruled incomplete securing the win for the Raiders.

“I absolutely knew that was coming,” Johnson said on the last play. “Initially he was so tall, I couldn’t get my hand on the ball when he first caught it, but then I raked my hands down.”

Plenty of Issues Left to Address

While the Raiders defense should be excited about their clutch performance, overall it still wasn’t a pretty sight as Herbert had his way with the Raiders secondary. Hopefully, Isaiah Johnson will build upon this performance and become an impact player for weeks to come as the defensive backs continue to look clueless and overmatched at times.

Had the last play not been overturned in their favor, then the post-game would have a very different tone and the Raiders defense would have been to blame. While Herbert has been impressive as a rookie, it was still too easy for him to march his team all the way down the field with the game on the line.

This game offers some building blocks for the Raiders defense to build upon yet they have still not proven that they can be relied upon game after game. Next week brings Drew Lock and a Denver Broncos team that has not blown anyone away on offense this year and it must be a game where the defense shuts things down.