Raiders defense delivers…for the most part 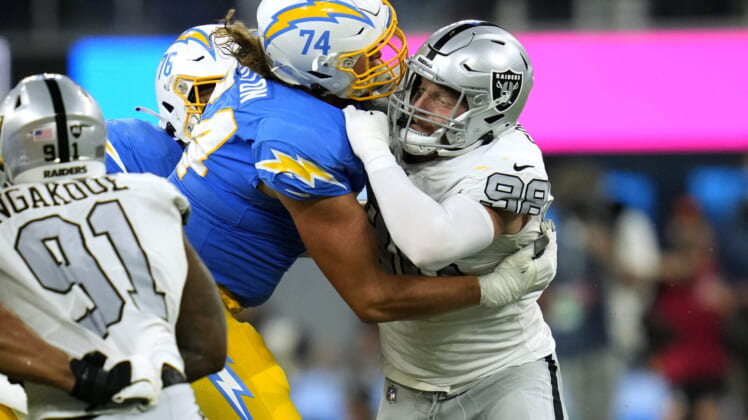 The Las Vegas Raiders defense was tested early and often against the Los Angeles Chargers in the 28-14 loss at SoFi Stadium in Inglewood, Calif.

Las Vegas also dealt with injuries as cornerbacks Trayvon Mullen Jr. and Damon Arnette went down with foot and groin ailments that sidelined them in the second half, already trailing 21-0 at halftime.

“We lost a couple corners,” head coach Jon Gruden said. “Arnette went out. Mullen went out. Nate Hobbs went out at the end of the game.”

Gruden said he will provide an update on the injuries later in the week.

The Chargers offense was on the field for 19 of the 30 minutes in the first half as the Raiders punted in five of their seven drive and added a turnover on downs. On top of that, Las Vegas did not record a single yard of offense in the first quarter.

As a whole, the Raiders defense was on the field for 75 plays as the Chargers had the ball for 35 minutes.

Despite taking the first loss of the season, Gruden said there were some bright spots, but the team need to start better.

Raiders defense on the line

One of positives came from the Raiders defensive line as the unit stepped up in between the team’s two touchdowns on consecutive possessions, which led to two Chargers punts and the momentum shifted to the Silver and Black.

In addition, linebacker Corey Littleton led the team with 14 total tackles with nine of those coming individually. Linebacker Denzel Perryman was right behind Littleton with 12 total tackles and eight solo tackles.

The 27-year-old linebacker said the defensive room – including himself – will look at film and get ready for their next game with one less day of preparation.

“We’re going to go back in, watch the tape and see how we fix it,” Littleton said

After a fourth down completion for the Bolts in the third quarter, both sides of the Raiders defensive ends from Maxx Crosby on one side and Yannick Ngakoue on the other side stopped back-to-back plays that set up a sack by nose tackle Darius Philon, one his team-high two sacks.

The Chargers converted on two of its three fourth-down plays.

Gruden said the team will have to improve and praised the Chargers for going for it on fourth down.

“We’re going to have to play better in all areas, not just defense,” Gruden said. “It would help if Mullen, Arnette and some of our guys were back there helping us. But I’m not going to make any excuses. They went for it in some critical fourth downs. I give them credit, backed up in their own territory in a tight football game.”

The Chargers punted on their first two drives of the second half before scoring on an 11-yard touchdown run by running back Austin Ekeler, extending the lead to 28-14 with 5:20 left in the fourth quarter. The score followed a missed 52-yard field goal from Raiders’ kicker Daniel Carlson.

Up next, Las Vegas faces former Raider Kahlil Mack and the Chicago Bears next Sunday at 1:05 p.m. on CBS.

The Raiders are one of three AFC West teams at 3-1 with the Chargers and the Denver Broncos.

Gruden said some of the early wins have prepared the team against the Bolts but could not execute.

“I’m proud of our team,” Gruden said. “I’m going to reiterate that. We’re three and one. We’ve had some tough overtime victories and we fought back to put ourselves in positions to make a dramatic finish, but we just didn’t make the plays.”