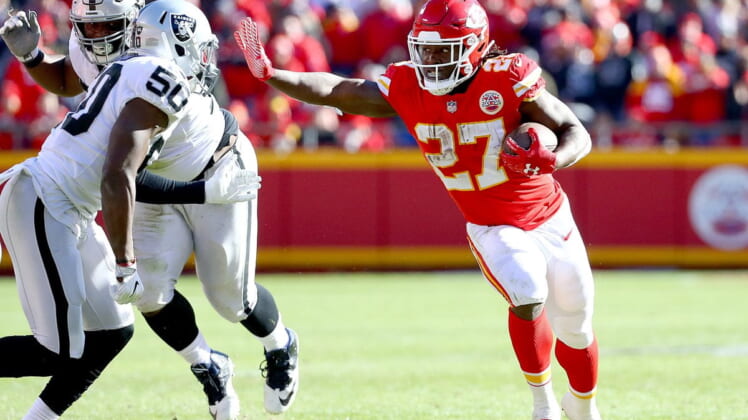 In the end, it appears the Raiders just didn’t want it as bad as the Chiefs.

What was likely their only path to the playoffs in what has been a tumultuous 2017 season, the Raiders played as poor an offensive game as they probably could and never appeared to play with any renewed vigor or sense of urgency. In what amounted to a playoff game on the road in Kansas City, the Raiders remained consistently inconsistent in a 26-15 loss to the Chiefs.

The Chiefs ended their losing streak against an uninspired Oakland squad.

The same Chiefs who had the 30th-ranked defense in the NFL and were missing their top two defensive standouts.

Yeah, it was that bad.

The loss drops Oakland out of a first place tie in the AFC West and now makes a playoff appearance a pipe dream.

What was disturbing about this game wasn’t even that the Raiders lost. It was that they seemed seemingly unprepared, unmotivated and generally uninspired to play for a playoff spot and AFC West Championship. Despite the late offensive surge by Oakland, it wasn’t enough. Too little, too late.

There’s no doubt the Raiders need upgrades on the defense. It was the talk of Raider Nation during the offseason and preseason. The defense was not the reason this team lost the big game in Kansas City. The Raiders offense continues to falter – unable to ever get a rhythm going and unable to find game plan for success. The Raiders were going to have to score 30+ points to win this game. Everyone knew that coming in.

The Oakland offense continues to harm the team at almost every turn. Derek Carr has not been himself all season. The league’s highest paid offensive line is far too inconsistent. The Raiders wideouts (Michael Crabtree, Amari Cooper, Seth Roberts, Johnny Holton) consistently drop easy passes and fail to protect the ball. Marshawn Lynch has been the only offensive player that has improved through the back half of the season. The Raiders offense is like a bad soap opera – badly written, poorly executed, and full of unbelievable twists.

Carr, who received a massive contract extension in the offseason, finished the biggest game of the year completing just XX of XX passes for XX yards, 1 int, and no scores. Something has not been right with him all year and it’s up to Reggie McKenzie and Jack Del Rio to get him what he needs to get straight.

Almost every time the Raiders have had their destiny in their own hands, they’ve fumbled it away. Against the Chiefs, the Raiders again completely missed a golden opportunity. Perhaps its best. The Raiders found themselves in this position due to the Chiefs losing streak. It’s my guess the Raiders were always pretenders and not contenders.

The big question is what’s next? This team has too much talent on the offensive side of the ball to play this poorly. The front office and coaching staff have to address where they’re at and how things went wrong. That involves personnel on the field and on the sideline. There will be difficult conversations, to say the least. It’s hard to see the Raiders sticking with Offensive Coordinator Todd Downing. It just appears it’s not working.

Still, this team is much closer to being a contender than it is to being a perennial loser. That’s what makes what happened this season so hard to accept.

With the playoffs now seemingly an unattainable goal, the team and coaching staff need to use these last few weeks to evaluate everyone in the organization. Who stays and who goes is the question.

It’s too bad that’s where the Raiders are at.

After watching their performance in Kansas City on Sunday, it’s easy to see why they are a team on the outside looking in.