Raiders Close First Season in Vegas Crapping Out vs. Dolphins 26-25 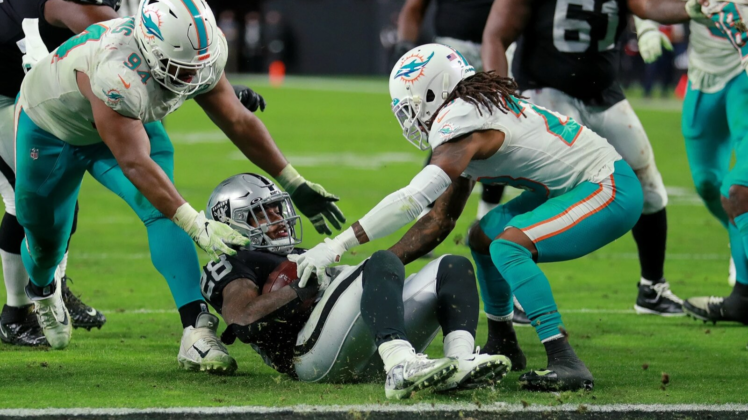 The Las Vegas Raiders found yet another way to lose as they become just the third team since 2000 to lose a game they led with 30 seconds left and the Miami Dolphins on their own 25.

The Las Vegas Raiders’ first season in Las Vegas came to an abrupt and fitting end for a team that calls the Mecca of gaming their home – they busted 26-25 against the Miami Dolphins on Saturday at an empty Allegiant Stadium.

The epic collapse was, again, indicative of a team that can score and win with offense but cannot find answers on defense.

After Derek Carr twice led his team down the field into scoring position in the fourth quarter, the Raiders played the percentages and instead of scoring an easy touchdown on the back of Josh Jacobs, opted to run the clock, kneel and kick a Daniel Carlson field goal. The question on whether or not to use that strategy was the first question for Jon Gruden (18-29 in his second stint over three seasons with the Raiders) after the game.

“I don’t regret it one bit” Gruden said. “I just regret the results.”

With the loss, the Raiders were officially eliminated from the playoffs and now cannot secure a winning season. The franchise has had just three winning seasons over the past 20 years.

The Raiders, who started off 6-3, have now lost five of their last six games and have seen an epic collapse in the second half of the season for the second-straight year under Gruden. In 2020, much can be attributed to the Raiders putrid defense which cost former defensive coordinator Paul Guenther his job earlier this month. Again, the defense had to just hold once for the Raiders to at least escape a losing record this season.

But, inexplicably, experienced interim defensive coordinator Rod Marinelli called Cover 2 the final drive of the game against a hot Ryan Fitzpatrick, who spelled the benched Tua Tagovailoa, and it got all bad from there.

On the previous Dolphins drive, Raiders LB Raekwon McMillian traded to Las Vegas from Miami earlier in the year, missed a tackle against RB Myles Gaskin who took it 59 yards to the house to give the playoff-eligible team the 23-22 lead with just under three minutes remaining.

After connecting with Nelson Agholor on a highlight-reel 85-yard touchdown the previous Raiders offensive drive, Carr again dialed up Agholor who drew a 49-yard pass interference call on Dolphins CB Byron Jones. That set up the Raiders with the first down on Miami’s 22-yard line. Then, after Dolphins LB Lyle Van Noy jumped into the neutral zone, the Raiders were inside the Miami 10 when Josh Jacobs ran what would have been a sure touchdown only to stop short of the goal line to eat more clock. The Raiders then set up for a 22-yard Daniel Carlson field goal, which was good, and grabbed a 25-23 lead with just 22 seconds left in the game.

That’s when the wheels fell off – again – for the Raiders’ defense. After the Raiders struggling young defensive backs gave up a 34-yard pass from Fitzpatrick to Mack Hollins, Raiders third-year defensive end Arden Key was flagged for roughing Fitzpatrick practically yanking his helmet off which added another 15 yards on to the end of the play. That set up the game-winning 26-yard field goal with just one second remaining on the clock.

Carr overcame leaving last week’s game against the Chargers with a groin injury. He finished the day going 21-of-34 for 336 yards and one touchdown. The Raiders failed to covert a third down the entire game (0-10) and had trouble in the red zone again having to rely on kicking versus scoring touchdowns.

The Raiders finish their season in Denver on Sunday.