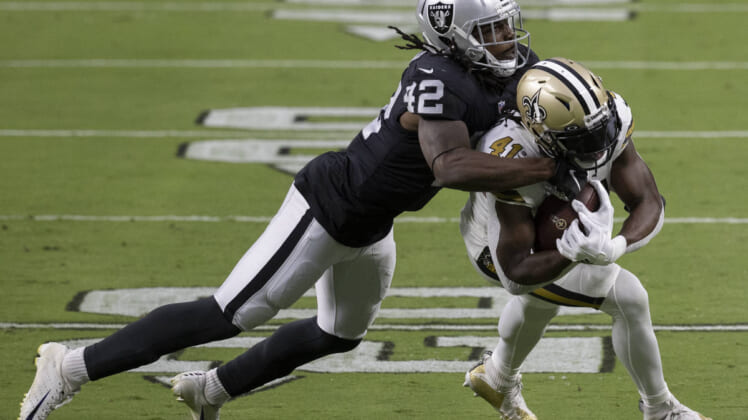 One of the Las Vegas Raiders biggest offseason acquisition of 2020 was former Rams linebacker Cory Littleton. The talented player has struggled to find his place – and game – wearing the silver and black. Could shrinking his role be the answer?

While the Las Vegas Raiders Week 8 defensive performance drew praise and skepticism because of the weather conditions, most would agree on one thing: linebacker Cory Littleton continues to disappoint as an every-down linebacker.

Last week, Littleton allowed receptions on three out of six targets for 26 yards, per Pro Football Focus. That seems like a good day. However, on the game tape, you’ll notice the Cleveland Browns left a lot of yards on the field because of drops. On one play, early in the fourth quarter, tight end David Njoku beat Littleton across the middle but dropped the pass for a potential big gain.

Cory Littleton has allowed 30 catches out of 43 targets for 345 yards. Although he’s yet to give up a touchdown in coverage, the 26-year-old has surrendered the second-most receiving yards among linebackers and the most yards after the catch (307) leaguewide.

How is it possible that Littleton gives up so much yardage on the field? He’s taken poor angles and routinely whiffs on tackles. In 2019, the fifth-year veteran missed five tackles all season compared to 14 through seven weeks this year.

How does a Pro Bowl-caliber player become a liability in the blink of an eye?

Remember, Littleton comes from a different system, playing under former Rams defensive coordinator Wade Phillips, who used odd-man fronts with two inside linebackers between the edge-rushers. He also lined up behind arguably the best interior defensive lineman in Aaron Donald.

Donald’s presence allows linebackers to pressure the pocket on blitzes and coverage sacks with offensive linemen double- and tripe-teaming him. Littleton took advantage, recording 7.5 sacks between the 2018 and 2019 terms. The Raiders don’t have a defensive lineman who commands consistent double- or triple-teams anymore.

As it pertains to Littleton’s poor angles and a worrisome number of missed tackles, he may not feel completely comfortable within defensive coordinator Paul Guenther’s system. Any time a player has to use more time to think about his next move rather than react, you’re going to see blown assignments.

Unlike the Rams, the Raiders operate an even-man base front (4-3 defense), though they keep two linebackers on the field in a nickel alignment most of the time. That’s still a significant adjustment for a player who spent three years in the same system and had to pick up a new scheme without a full offseason.

However, the Raiders may have put too much on Littleton’s plate without a full offseason in a new defense. The coaching staff should cut down on his snap count and allow him to focus on what he does best, cover pass-catchers in one-on-one situations. In other words, simplify the linebacker’s role.

Although that sounds like an excuse for Cory Littleton, he subtly acknowledged a potential disconnect between what’s he learned and how it translates on the field.

“The only thing I can do is do what is coached to me and try to put on the best performance I can,” Littleton said during media presser on October 1. “So far, it hasn’t been that great.”

While many read Littleton’s comments as a shot at the Raiders’ coaching staff, and particularly Guenther, he clearly hints toward his learning curve.

With the Rams, he knew the concepts of Phillips’ system. After a Pro Bowl 2018 campaign, any regression would fall on his shoulders as nothing would’ve been different in the grand scheme. However, in a change of scenery, he’s more reliant on coaching as he picks up the nuances of Guenther’s personnel roles and responsibilities.

Once Littleton becomes less dependent on coaching cues and more comfortable with how his attributes translate to Guenther’s system, we could see a better player in the second half of the season.

The Raiders cannot wait and hope it all clicks for Cory Littleton. They have to help him with his adjustments. Thus far, he’s played just about 100 percent of the defensive snaps. That’s a fair workload for someone with a top-dollar salary at his position.

However, the Raiders may have put too much on Littleton’s plate without a full offseason in a new defense. The coaching staff should cut down on his snap count and allow him to focus on what he does best, cover pass-catchers in one-on-one situations. In other words, simplify the linebacker’s role.

BD Williams of Tape Don’t Lie highlighted a set of snaps in which Littleton played well in man coverage against the Tampa Bay Buccaneers in Week 7:

Littleton won’t garner much applause for this performance because the Raiders defense gave up the most points (45) and yards (454) it had all season. Nevertheless, we can extract these positives and expand on those flashes.

For now, Cory Littleton seems best equipped to excel in basic tasks that allow him to use his strengths in pass coverage. Ask him to shadow a pass-catcher and insert Raekwon MacMillan on more early downs to reduce the missed tackles on defense.

Because Littleton doesn’t come off the field, he’s going to make the same mistakes during a game without time to process what’s going wrong with his tackling technique from snap to snap. The Raiders sent a fourth-round pick to the Miami Dolphins for McMillan, why not utilize his strength as a downhill defender?

As a rookie, McMillan recorded 105 tackles, five for loss, and only missed nine. He’s the complete opposite of Littleton in terms of his best attribute as a linebacker. The fourth-year veteran can fight through blocks and hit gaps to records stops, which is what the Raiders need on early downs and short-yardage situations. Yet, McMillan has played just 31 defensive snaps in seven games.

Guenther should drop Littleton’s snap count to about 75-80 percent and insert McMillan on some first and second downs to help Nick Kwiatkoski, who’s played well, in stopping the run

Without a comprehensive introduction to Guenther’s defense, newcomers will need to carve out a niche and play to their strengths until they’re adept in full roles. In Littleton’s case, that seems like a waste of money for the first year, but this method could help him salvage a disappointing start to his tenure in Las Vegas.

Guenther should drop Cory Littleton’s snap count to about 75-80 percent and insert McMillan on some first and second downs to help Nick Kwiatkoski, who’s played well, in stopping the run. Those two together can force opponents into third-and-long situations, which would allow Littleton to play fluidly in coverage on obvious passing downs.

In recent seasons, the Raiders didn’t have much depth at linebacker, so the coaches had no choice but to leave the most versatile players on the field for just about all the defensive snaps.

Now, Guenther can insert McMillan to hide Littleton’s struggles in pursuit angles and tackling until he shows some improvement. Once the versatile linebacker makes some strides, he can revert to a do-it-all role.

Among the Raiders fanbase, patience has become a dirty word because it seems this team has had to wait its turn for so long, but Cory Littleton didn’t come into the league and pop right away. It took him three seasons to secure a starting role and perform at a Pro Bowl level after going undrafted out of Washington. Give him some time as he adapts to wholesale change.

Sometimes, you have to crawl before you walk, especially when you’re loading and processing information in split-second decisions.