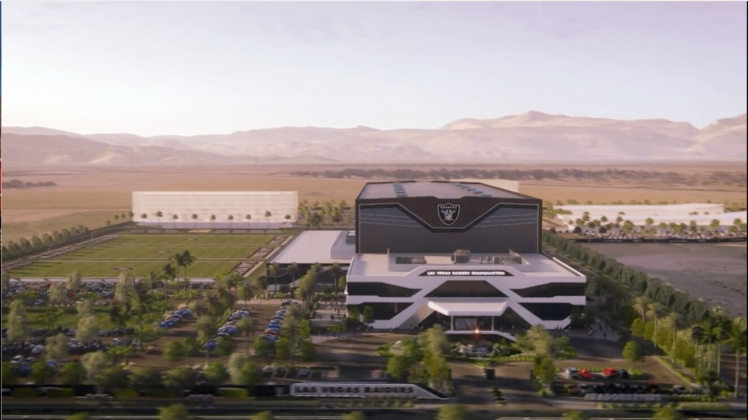 While most of the attention related to the Raiders moving to Las Vegas focus on the team’s new stadium, today the team’s true “home” broke ground as the team’s office and training complex got underway in Henderson.

Lost in the discussions of the team’s relocation to Las Vegas, and the construction of the team’s new stadium a stone’s throw from the famous Las Vegas Strip, is the day-to-day reality of running an NFL franchise and the people who run it. They work every day of the week and it’s not just in a stadium. That’s why Badain’s family refrain reminds us this building is where the men and women who make up the entirety of the organization will spend most of their time.

The kickoff of the construction of the Raiders true daily home started with fanfare on the site as media, community leaders, VIPs, and current and former players gathered for the ceremonial event. On a chilly overcast day, the backdrop of Mount Potosi, and it’s snow-capped peak, gave yet another stunning visual as the program unfolded.

Badain began his comments sharing a story about a current employee who started with the team as a young man, grew up, and started a family while moving up through the organization. Badain visited this employee’s home in Henderson one evening after the family relocated to the area. He shared how in the Bay Area his commute was over an hour each way and how his close proximity to the new facility will mean a five-minute commute instead. He then concluded asking Badain to thank owner Mark Davis for moving the team to Southern Nevada – the implication of a better quality of life and more time with his family in what is a demanding business.

I share this story as a bit of a different take on this event. Groundbreakings are always an anticlimactic event in my book. But the significance of this one is yet another milestone into Las Vegas (and now Henderson) becoming an NFL town. As significant as the NHL’s Vegas Golden Knights were to the city and major league sports coming to the once pariah of such things, it’s nothing close to what the NFL and the Raiders are about to unleash on the area.

Behind every team and the faces and names we all know in professional football, there are unseen masses of others who work for the team. The everyday employee – the ticket office, the legal staff, the business staff – those folks live and work in the community. This groundbreaking is significant as this is the location each and every one of them will drive to each morning. It’s the “office” and this new state-of-the-art facility will house their desk along with the locker room, weight room, practice fields, and everything else to help the team win on the field.

Badain went on to extoll the number of resources and effort going into the construction of the facility to make it the finest in the league, according to the Raiders.

“it’s going to have every bell and whistle to provide the player,” Badain said. “We’ve really done our homework on this one.”

The Raiders are spending $75 million on their new corporate home.

While the majority of the focus will always be on the players, coaches, and action on the field, the 25 or so full-time Raiders employees already living in the valley have already integrated into the local community and this new office will be their work home come 2020.

Those employees – and those to follow in a few short months after the team officially moves to Henderson – will have a true home and that has to be of comfort after the purgatory the organization has had to endure the past 18 months.

“Many of our employees settled on living in Henderson so having their office in a community they’re already investing in is going to be great for everyone,” Badain added.

The new building and training space is slated to open in early 2020 and will bring 250 new jobs and increased professional and commercial development in the West Henderson area, including the Henderson West Urban Center.