Raiders avoid embarrassment, win in Cleveland so why the whining? 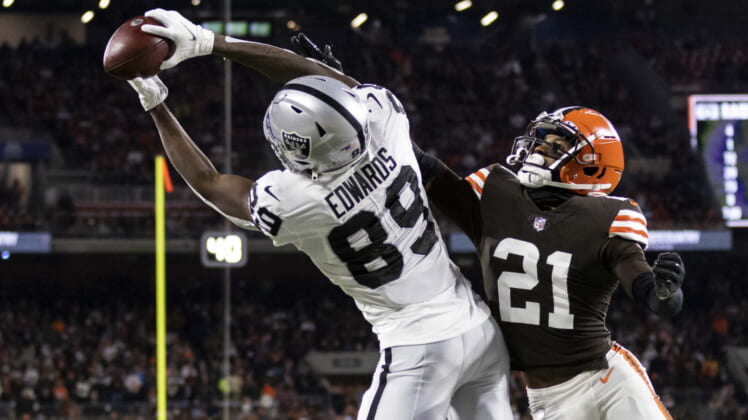 Without a doubt, jokesters would’ve made the Las Vegas Raiders a punchline if they lost to a shorthanded Cleveland Browns squad that didn’t have several key players and started third-string quarterback Nick Mullens.

Nonetheless, just like opponents won’t feel sorry for the Raiders who lost their head coach in Jon Gruden because of an email scandal, waived second-year wideout Henry Ruggs III after his car crash that resulted in a fatality and declared tight end Darren Waller inactive (back/knee), the Silver and Black shouldn’t think twice about celebrating Monday’s victory.

No Such Thing as a Disappointing Win

From a fan perspective, the Raiders should’ve crushed the Browns, who had several backups on the field. However, Cleveland went into the game in a desperate situation with its playoff hopes hanging by a thread. Teams in dire straits often give opponents a tough battle regardless of who’s in uniform.

Keep in mind, the Browns still had some notable names active, including star edge-rusher Myles Garrett, safety John Johnson III, cornerback Denzel Ward and running back Nick Chubb, who nearly carried them to victory with 91 rushing yards and a touchdown.

Don’t forget the Raiders came into this contest on a slump, losing in five of the last six weeks while shorthanded as well. Ask any player, they’ll tell you it’s hard to win football games, and as spectators, we often lose sight of that.

If the Raiders had lost Monday’s game, they would’ve held the No. 10 overall pick in the draft, and based on some responses to a tweet about the club’s victory, some of the team’s supporters wanted that outcome because they don’t see a pathway for Vegas in the playoffs.

Yet, with COVID-19 cases sweeping through the nation and the league, injuries, random turnovers, and poor or good matchups, you never know how a team’s season will end in January. Of course, this sounds like false hope, but athletes play to win the game.

Quarterback Derek Carr, who will approach the team about an extension in the offseason, isn’t thinking about a future high draft pick. Other players on that squad with expiring contracts need to finish this season on a strong note to raise their market value in 2022.

If you still highly doubt this Raiders team after their victory over a depleted Browns roster, that’s reasonable. The club hasn’t garnered much faith after its Week 8 bye, but to call this a “meaningless win” because of Vegas’ shoddy playoff hopes discounts what the game means to players who still have a lot at stake down the stretch.

In a league that features the cream of the crop, style points don’t matter. Just Win Baby.

Raiders controlled the game, slipped but pulled out a win

As for the performance on the field, the Raiders’ 26th-ranked run defense still faced a tough test with Chubb healthy behind an offensive line that still had three of its starters on the field.

Going into Week 15, Vegas had allowed 32 or more points in four of its previous five outings, so it was an oversight to take this matchup for granted in favor of the Silver and Black. Cleveland plays a physical style of football that could’ve embarrassed the Raiders defense at FirstEnergy Stadium. Yet, the unit held its ground, allowing 3.7 yards per carry, which prevented the Browns from controlling the tempo.

In fact, the Raiders dominated time of possession through three quarters:

In the end, Vegas did a good job with grinding through long drives and finishing with points. The offense put together three 10-plus play drives and racked up 13 points on those possessions.

Though Derek Carr’s fumble and late-fourth interception almost cost Vegas the game, he deserves credit for not folding and leading his team into field-goal range, which set up Daniel Carlson for the game-winning 48-yard kick.

The Raiders defense came out with a ton of energy early and held the Browns scoreless through 4:33 in the third quarter. When the offense needed clutch plays on the final drive, Carr, tight end Foster Moreau and wideout Zay Jones put the team in a position to win. That’s complementary football.

Though some fans on social media showed dissatisfaction with Monday’s performance, the Raiders get back to .500 with a critical game against the Denver Broncos (7-7) up next on Sunday. The loser of that matchup can bury their playoff hopes—the winner survives with a sliver of hope whether you feel it’s a cruel tease or not.