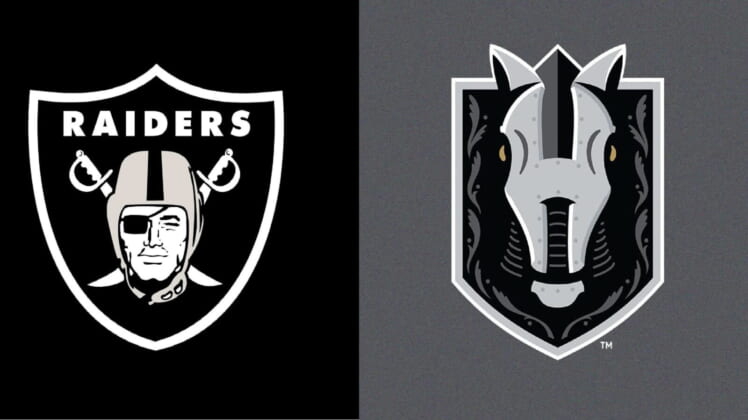 Last week the Las Vegas NHL franchise – the Vegas Golden Knights – announced the name and color scheme for their new AHL minor league team. The Henderson Silver Knights will launch this next season and their colors match those of the Las Vegas Raiders making some in the organization a bit unhappy.

The Las Vegas Raiders, after spending the past three years building a new stadium, a new headquarters, and a community relations staff in their new home market, have to feel a little slighted by the city’s first major league sports franchise.

The Vegas Golden Knights aren’t endearing themselves to their new neighbors on Raiders Way in Henderson after co-opting the legendary silver and black color scheme for their new American Hockey League franchise the Henderson Silver Knights.

Members of the Raiders organization aren’t happy with the timing and decision to use the color scheme on the eve of the Raiders’ big arrival in Las Vegas. And while the Golden Knights are beloved by their fan base and the community at large here, the perceived arrogance of the organization is gaining traction.

From demands for payments during the COVID-19 crisis, to a lack of follow-through on a pledged donation to workers at T-Mobile Arena, it’s not a question of if but when these two organizations become more competitive.

Update: Several sources have contacted us to report the Golden Knights have repeatedly tried to give the donation to the impacted employees but is being held up by concession vendor Levy Restaurants. We’re told Levy has been unwilling to take the money and distribute it to the impacted employees over legal concerns. Levy has not responded to numerous requests for an interview.

For the most part, the shine has not worn off the VGK luster created by the team’s first magical season. Yet the adoption of the silver and black color scheme – which may seem more of paying homage to the NFL team – could seem a trivial thing between the city’s teams, but it is not. The Raiders are known as the “silver and black” – it’s synonymous with their 60-year old brand and multiple people in the organization, who cannot comment publicly, have said some are not happy with the situation.

One person who has been linked to the Raiders and Golden Knights, since helping to lobby for the approval of funding for Allegiant Stadium, is Tommy White of the Laborers Local 872. When I was talking about this on our CBS Sports Radio 1140 show Sunday, White called in to tell it like it is – in his view.

There’s no ambiguity there from White.

White says he’s a Golden Knights fan (he often attends games with Davis and his Local 872 owns tickets for its members too) but that could change. He’s reconsidering his advertising relationship and fandom because of what he believes is a money grab by the VGK organization.

“This is in my eyes, and a lot of people within my organization, a way for Bill Foley and the Foley family to make more money off the silver and black,” White said during the phone call. “They (historically – not Foley) did it in L.A. with the Kings – I think he could have made a better choice.”

When the Los Angeles Kings, then owned by convicted felon Bruce McNall, changed their colors to silver and black, the Raiders, also in Los Angeles at the time, were not happy with the direction either.

Although the Golden Knights and Raiders have played nice over the past few years publicly, the relationship started out poorly when Foley decried the use of public funds for a new stadium.

Foley: Better Uses of Taxpayer Money Than Funding of Stadiums

“We can better spend that money on firefighters, teachers, and policeman,” Bill Foley told CNBC’s “Power Lunch” in 2017. “Let’s have the best of that as opposed to building the big stadium.”

And while there are plenty of locals who might agree with Foley’s 2017 assessment, apparently something in the NHL team’s owner’s view on public money for stadiums changed.

Just last month, Foley’s new Silver Knights benefited from the City of Henderson investing $42 million in taxpayer money to pay for half of his team’s new 6,500-seat hockey arena. The public money, unlike the hotel tax levied to pay for the Raiders and UNLV football’s new Allegiant Stadium, was funded by the City and includes $16 million earmarked for redeveloping blighted areas. Henderson will also subsidize the Silver Knights rent payments with an additional $3 million a year.

At the same time Henderson approved the arena, they also approved an increase of three cents in property taxes per $100 of the assessed value of area homes. While not officially linked, many opponents believe they are related.

As someone who doesn’t live in Henderson, I supported the arena as I believe the opportunity to increase revenue via other events in the space will outweigh would could of been done with the open-air amphitheater that sits on the site now. Still, Foley railed against the use of public dollars when it favored an entertainment competitor but was perfectly fine with it when it benefits him.

Hence the charge of hypocrisy by many.

For those of you who say this is much ado about nothing, remember it’s an economics-based principle. Las Vegas, overall, is still a small market at 2.5 million residents. There are only so many entertainment dollars to be had.

And, yes, we’re talking about minor league hockey. But with the NHL parent club owning the new Henderson team, it’s attempting to capture more dollars from those priced out of the NHL’s fifth-highest cost per-game attendance. Many Las Vegans (and Hendersonites) can’t afford to go to a VGK game at T-Mobile. That means they can afford more games in Henderson. That means less money to spend on Raiders games too – hence the competitive nature of the business.

Yes, Raiders tickets are now the most expensive in the NFL (on the secondary market) but there are only eight games. Fans have to decide where to spend their money and they can’t go to everything.

Ultimately, it’s up to the fan to decide where they spend their hard-earned dollars.

Still, don’t fool yourselves. The Raiders and VGK compete with one another and the shot across the bow created by the name and branding of the new hockey team in our area isn’t popular with the bigger pro franchise now calling the Las Vegas Valley home.

We’ll see how it plays out in the coming months.