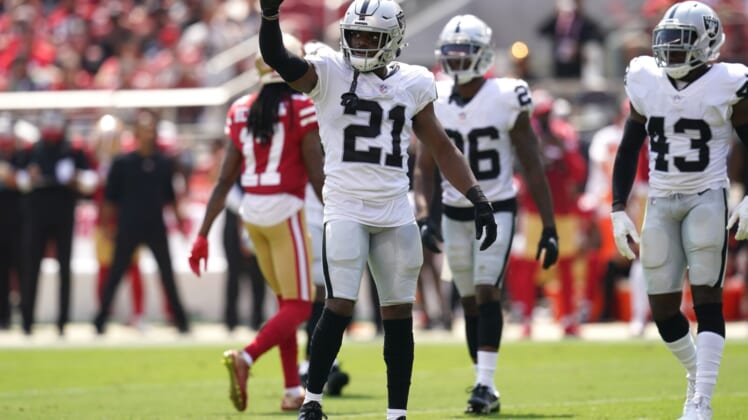 At the beginning of Friday’s press conference, head coach Jon Gruden ruled out cornerbacks Trayvon Mullen Jr. and Damon Arnette, which means 5’8″, 187-pound Amik Robertson will have an opportunity to shine in a matchup against the Chicago Bears.

In Week 4, Mullen exited after six snaps with a foot injury. Damon Arnette, who usually subs in on the boundary, had a groin issue and only lined up for 22 snaps. The team designated cornerback Keisean Nixon for return from injured reserve, and he’ll likely play, but don’t expect him to take on a heavy workload in his season debut.

The Raiders must dig deep into their depth at cornerback, but they have a feisty ready-to-go competitor in Amik Robertson, who’s shown improvement under new defensive coordinator Gus Bradley. Gruden seems intrigued by the second-year cornerback’s offseason buzz.

“We talked a lot about him in the preseason, as you know, he’s had a good preseason,” Gruden said Friday. “His second year is much better. He’s just more comfortable, down-after-down consistency is better. He’s tackling. So, we’re anxious to see him continue his development.”

Back in August, Bradley talked about Amik Robertson’s performance in the slot and his growth on the boundary.

“I’ve been impressed with him now…,” Bradley said in August of Amik Robertson. “He did a good job as a nickel… So, the way he’s done some things on the inside we feel like it’s getting more consistent, and then on the outside, I think he’s getting more comfortable with the techniques.”

At Louisiana Tech, Amik Robertson didn’t just survive on the perimeter, he regularly challenged bigger wide receivers and won plenty of battles with his aggressiveness and ball skills.

Though Robertson didn’t work out at the NFL Scouting Combine while he recovered from surgery on his groin, he sent a message loud and clear through his interviews, highlighting how his strengths compensate for a height disadvantage (h/t CBS Sports’ Emory Hunt):

Robertson said, “you can miss with your hands, but you can’t miss with your feet,” which means he’s typically in the right spot to make a play on the ball. His aggressive style makes it difficult for wideouts to create separation off the line of scrimmage and at the top of routes.

At his size, Robertson must have impeccable timing to break up a pass or snag an interception. Fortunately, he does a good job with matching a receiver with his footwork and then keeping his eye on the ball to force turnovers, which resulted in 14 interceptions and 34 pass breakups through three collegiate terms.

What does this all mean for Sunday though?

With Nate Hobbs a full go at practice this week, he’ll likely continue to line up in the slot with Robertson on the outside. Against Los Angeles, the former played 36 snaps on the inside while the latter took the field for 35 plays on the perimeter, per Pro Football Focus (subscription required).

During the Chargers’ matchup, you could hear ESPN announcer Brian Griese point out the supposed mismatch between Mike Williams, who’s 6’4″, 218 pounds, and Amik Robertson. However, quarterback Justin Herbert went elsewhere with the ball. On a rewind of the game, you’ll notice Robertson had good positioning while covering Williams, which speaks to his field awareness and technique, specifically his refined footwork.

On Sunday, Robertson could see a lot of Darnell Mooney, who caught five passes for 125 yards against the Detroit Lions last week, and Marquise Goodwin, who has blazing speed and big-play ability.

The Raiders have to respect quarterback Justin Fields’ deep ball. He connected on two 21-plus-yard passes last week—both to Mooney—which advanced the Bears into the Lions’ red zone and led to touchdowns.

With Robertson’s willingness to come downhill and tackle, he can supplement the Raiders’ 23rd-ranked run defense if the Bears decide to help Fields with a heavy dose of running back Damien Williams on the ground.

Coming into the league as a sleeper, Robertson has an opportunity to make a statement Sunday and perhaps begin to carve out a consistent role for himself going forward. Arnette has been a liability in coverage while playing a limited role this year, so the Raiders should look forward to giving Robertson a shot to offer a higher quality of depth on the boundary.