Raiders 4 keys to a win against the Giants 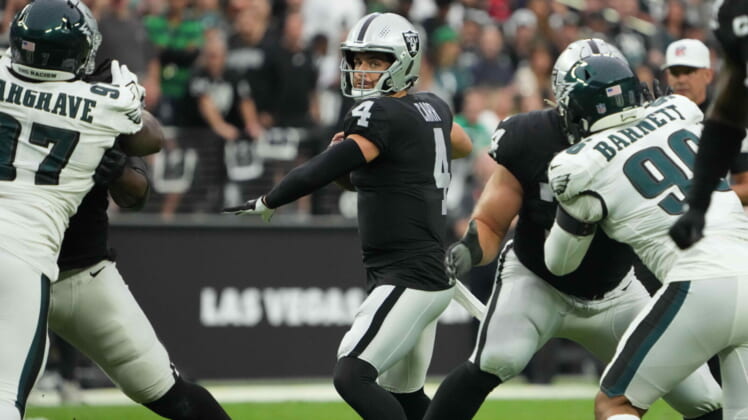 The Las Vegas Raiders take on the New York Giants on Nov. 7 at 10 a.m. in a matchup that marks the second time this season – and first since Week 2 – the Raiders are traveling to the east coast. This is the first matchup since Dec. 3, 2017, when these two teams faced off in Oakland for a 24-17 Raiders victory. Here’s the Raiders 4 keys to watch on Sunday:

Three weeks ago, the Raiders lost their head coach. Fast forward to earlier this week, they lost one of their top receivers.

When Las Vegas went up to Denver to take on the Broncos a few weeks ago, no one knew what to expect – both mentally and physically – in week of uncharacteristic preparation as coaching changes occurred.

Yet, the team still came out and got a 10-point victory against a divisional opponent.

The question remains: How will the team respond?

Defensive coordinator Gus Bradley said through his experiences as a coach, players know how to overcome such circumstances, but the only variable is time.

“Players are very, very resilient,” Bradley said. “That’s what I’ve learned. This situation’s no different. They each have their own way of handling it, some will come in and talk to their position coaches and coaches as well as their teammates. Then they go through that period of time, and I think it’s how quick, how long is that period of time to go through those emotions.”

The Raiders entered this week fresh off the bye week entering practice on Wednesday, which has continued into Friday.

Only defensive tackle Johnathan Hankins with a neck injury and right guard John Simpson with a knee injury were on the Raiders’ injury report but were both full participants in Wednesday, Thursday and Friday’s practices.

Bradley said the moments when players take time off, injuries may arise, but the trainers have kept the entire 53-man roster healthy or recovering to be healthy, even during a week with no game preparation.

“When you come off a bye week, to get them back into it, I give credit to our strength staff,” Bradley said. “Sometimes you come back after some periods of time off, you come back and you’re a little bit cautious about that first day of practice.

“You see some hamstring injuries or muscle tissues because it’s been some time since they’ve practiced as a team. But we’re healthy now with the guys that we have part of the 53.”

On the flip side, the Giants have been bit by the injury bug on top of preparing on short week due to playing on Monday night.

Giants’ running back Saquon Barkley and a couple of his running back teammates tested positive for COVID-19 before finding out it was a false positive test. Barkley has also been dealing with an ankle injury and will not play on Sunday.

Barkley is one of 13 players on this week’s Giants’ injury report and is one of five players that will not suit up on Sunday.

New York wide receiver Kadarius Toney, who was limited in all three Giants’ practices this week with a thumb injury, is scheduled to play.

The 6-foot rookie receiver has appeared in seven games this year. His breakout game this season came against the Dallas Cowboys four weeks ago when Toney recorded 10 receptions for 189 yards.

“He’s a guy that we really have to have good awareness,” Bradley said of Toney. “He’s a guy that’s space tackling is a very important part of our gameplan. He can take a 5-yard catch and turn it into an explosive play.

“I’m sure they’re going to try to find different ways of getting the ball in his hands. He’s also a great thrower. (He) can throw the ball, so we have to have really good awareness where he’s at.”

3. Raiders to face familiar running back

With Barkley out, that means the starting running back for the Giants will be former Raider Devontae Booker, who spent time with Las Vegas last season.

This season, the Sacramento, California, native has played in seven of the Giants’ eight games and has seen his role increased four weeks ago when Barkley got hurt.

Over that last four games, Booker has averaged 14 carries for 49 yards and four catches for 31 yards. Last week in Kansas City, the 5-foot-11 rusher recorded 15 carries for 60 yards and five receptions on six targets for 65 yards.

Interim head coach Rich Bisaccia, who coached Booker on special teams last year, said the Raiders have had to study and get ready to face the 29-year-old rusher.

“If you look at the Kansas City game the other night, he had a tremendous game,” Bisaccia said of Booker. “Whether he’s running inside or whether he’s running stretch for them, he’s big in the passing game and big in the screen game. We’re really preparing to play against a really good back.”

One of the successful parts to the Raiders being 5-2 so far this season is their defense, led by defensive ends Yannick Ngakoue and Maxx Crosby, who both have received AFC Defensive Player of the Week honors earlier this year.

In addition, linebacker Denzel Perryman ranks second in the NFL and leads the AFC with 81 total tackles.

Through seven games and eight weeks of the season, only 11 teams have given up less points than the Raiders at 166 points.

As a team, the Las Vegas is the third-best NFL team with six rushing fumbles, only trailing Indianapolis and San Francisco, who each have seven. The Raiders have also allowed the fifth-least passing yards.

The defense continues to be a focal point for the Raiders as they enter their final game before the halfway point of the 18-week regular season.

The Raiders and Giants kickoff Sunday morning in a game that will be televised on CBS.