Raider Nation’s Long Nightmare is Over as Antonio Brown Released 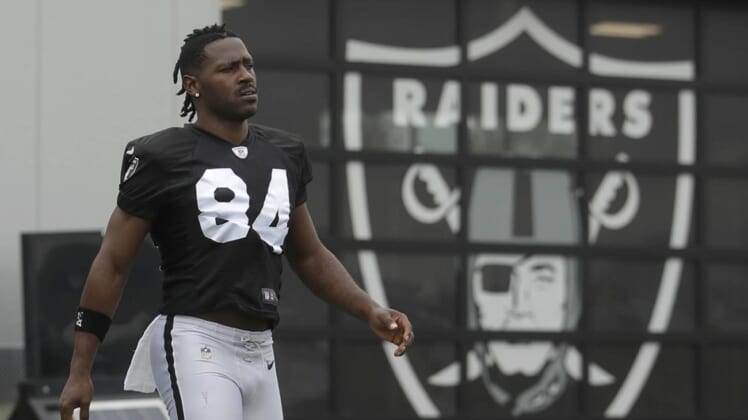 In what was looked at as the most significant move of the NFL offseason, the Raiders acquisition of talented and troubled wide receiver comes to a merciful end.

In his 4th Century BC play Electra, Greek playwright Sophocles, who specialized in tragedies, wrote something both Jon Gruden and Mike Mayock can relate to on the day they’ve decided to release wide receiver Antonio Brown.

The play, which occurs following the Trojan Wars, finds Electra seeking revenge, along with her brother Orestes, against their mother Clytemnestra and their stepfather for the murder of their father Agamemnon.

During a key scene, Electra laments: “All my love gone for nothing. Days of my love, years of my love.”

The tragedy that was the marriage between Brown and the Raiders came to a quick end as the player was released by the team this morning after weeks and days of endless drama off the field. There was talk and lots of love given by Gruden and the Raiders, but like Electra, all was for nothing.

Just three days after a verbal and, alleged, almost physical altercation between Brown and Mayock on the practice field, the Raiders had enough. Despite arguably the best athletic ability of any receiver in the game, the Raiders could no longer deal with Brown and the massive chip on his shoulder.

Luckily for Oakland, not only was their love short-lived with the mercurial talent, but they spent no money in making what was the right move for this team.

All my love gone for nothing. Days of my love, years of my love. – Sophocles, Electra

Due to his insubordination, and his missing every required workout he needed to attend to get paid, Brown leaves the Raiders without having received a cent from the team and his $30 million contract is void. Imagine a 65-year old Brown looking back and trying to wrap his head around losing $30 million in just three days. Regret is the most expensive of all emotions.

As I have said all along, the Raiders handled the situation to perfection – until the very end. When the team failed to suspend the receiver (although they did fine him considerably), and said they would play him Monday night against Denver in the team’s season opener, that was a mistake. Again, Brown was able to dictate the narrative and do what he wanted to. It was a bad precedent and those close the situation told me some in the locker room were not happy.

Still, the team publicly rallied around their selfish teammate.

Then, sometime Friday, Brown received word he’d lost his guarantee, owed the team over $200,000 in fines, and would be on, essentially, a week-by-week contract. Later, he released a cryptic video on YouTube in which he shared personal phone conversations with Gruden.

“How is the league, its teams, and its culture “against him?” What exactly is the nature of his beef with the rest of the world?”

In true Sophocles fashion, the true weight of the tragedy was upon us.

Brown then posts on Instagram at 6:01 AM ET (note: this is calculated to hit at 9 AM ET for key media exposure) he wants his release from the team. In the post, Brown ever the victim, claimed he was misunderstood and that the “system” was stacked against him. Truly confusing and disconnected stuff.

The Raiders had enough and at 8:56 AM PT, the team official granted Brown his wish.

So now the Raiders move forward. Something tells me, despite the public stance and Gruden statements, they had already planned on playing without Brown for a long time. So many take Gruden at face value and there’s a lot more happening below the surface that is guarded and protected.

I was a defender of Brown early on with his injury and helmet. Clearly, he has lots of issues and it’s almost impossible to understand what they are. How is he being disrespected? How is the league, its teams, and its culture “against him?” What exactly is the nature of his beef with the rest of the world?

The NFL and professional sports is full of players who are just different cats. They live their lives in a different way and that can sometimes rub people the wrong way. That’s all good in a culture that says it’s more inclusive. But it’s hard to understand, sympathize or support someone when they can’t articulate what it is they have a grievance over.

That’s the rub with Brown. There’s no understanding to what exactly his problem is. That’s why the Raiders had enough and let him go despite the fact they would be better – as a football team – with Brown on the field.

Obviously, I am not a doctor and have no idea of what mental state Brown is in. Still, it’s concerning that he seems so disconnected from reality and the world’s perception of him. It’s not his own perception and is far off its created something like this. You can only hope he gets to a state of mind (especially as a man, father and husband) where he’s getting the support he needs.

The Raiders image is taking a hit – again – with this latest fiasco. If they go out, beat Denver on Monday, and move forward, they’ll recover quickly. If things go south on the field from the get-go, it will be hard for Gruden and his guys to get past it.

Despite some missteps, you have to think the Raiders, overall, are in a much better place and find themselves removed from a possible season-long headache.

Whether or not this tragedy ends here, or extends its time on stage, remains to be seen.