Raider Nation: The 2019 Season Apocolypse is Not Upon You 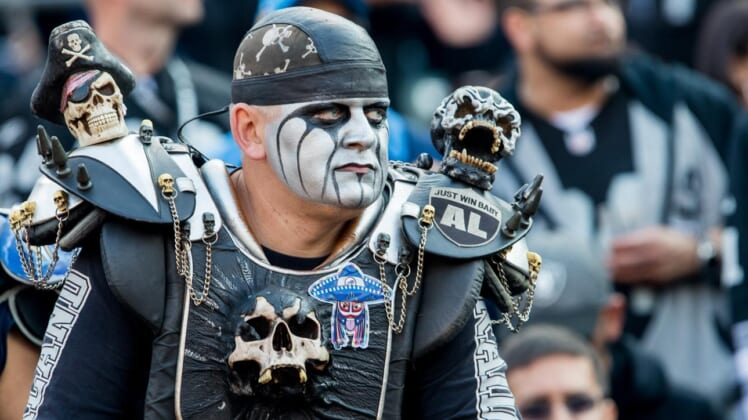 After their latest lackluster loss, the Raiders may have some work to do and there may be concerns over the team in 2019. Despite that, it’s only been three games and the season is not lost – yet.

There’s no denying the loyalty, passion and downright love that Raiders fans have for their team – win or lose. And even though they sometimes are the butt of jokes and unfair stereotypes, I believe they are the best fans in all of football.

Who else would show up to watch their team after posting just one winning season over the last two decades?

Despite this overwhelming loyalty and passion for their silver and black, you would have thought it was Week 17 after the team’s latest loss at the hands of the Minnesota Vikings 34-14 on Sunday.

I’m here to tell you: the season still can get better.

The website Playoffstatus.com keeps their NFL Post Season Probabilities table that “presents the probabilities that your team will proceed to different playoff rounds.” After last week’s loss, the Raiders post-season chances (remember, purely statistical) are pegged at 25-percent. That’s a better chance than Atlanta (24%), Pittsburgh (19%), Denver (9%), and the New York Jets (-9%).

Now, I’m not saying the Raiders make the playoffs or that their company towards the bottom quarter of that chart is something to make you excited about, but this season is far from over.

Calls for Jon Gruden (who is barely in the second year of a 10-year contract) and Mike Mayock to be fired are just ludicrous. Anyone calling for either should be drug tested.

Are there major concerns after the last two weeks? There certainly are. I addressed several of them in my post-game column and those issues must be fixed quickly for this team to progress where it needs to.

There have also been positive signs, including the development and play of players like tight end Darren Waller. Many of these same apocalyptic fans said this team could never replace the team’s former tight end, and leading receiver, Jared Cook. Waller, thus far, is proving them wrong. See fans, there are some good things happening.

Still, with just three games passed, this is not the apocalypse nor the end of 2019. While signs the past two weeks have been discouraging, there is lots of football yet to be played. Considering the Raiders young roster, there is reason to believe things can get better and get better quickly.

The overreaction to last week’s loss is palpable. My argument is this continues to be the self-defeating malaise that hangs over the Raider Nation because of the last 17 years. I get it. I grew up a Chargers and Padres fan – I never tasted a championship just as younger Raiders fans have never seen their team win. Older Raiders fans know what it’s like to be at the top and that can hurt too.

As this season began, I said, realistically, a 6-7 win season would be good for this team considering its ridiculously difficult schedule. Our Sr. NFL Columnist Moe Moton thinks the Raiders will win just three games.

Calls for Jon Gruden and Mike Mayock to be fired are just ludicrous. Anyone calling for either should be drug tested.

I still think they could eclipse last year’s four-win season but they have to start Sunday in Indianapolis. Time isn’t out but if they look lost and ill-prepared on Sunday against the Colts, then I’d be closer to hitting the panic button.

After two weeks in-a-row of Oakland losses, not many seem to be taking my advice. That despite both times the Raiders losing to the better team.

Raiders fans have been waiting decades for the true fulfillment of the late Al Davis’ motto for his beloved franchise: Commitment to Excellence.

While the Raiders have a huge hill (maybe mountain?) to climb this season, all hope is not lost. They need to get better week by week and simply treading water isn’t an option.

All is not lost. That may come at some point this season, but after three games, keep your head up Raider Nation.