And while there are merits on both sides of the (Carr) argument, it has divided the world's best fanbase at a time when the franchises' best days lie ahead. 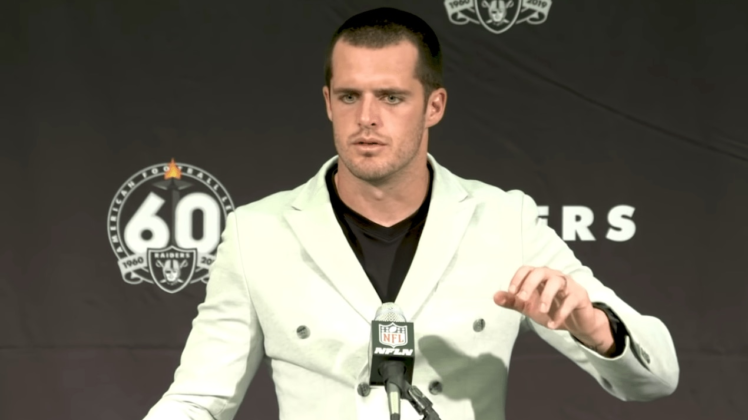 With the future looking very bright as the team becomes the Las Vegas Raiders, fans seem to be more divided than ever and primarily over one subject.

With the 2019 season – with all its ups and downs – now behind the soon-to-be Las Vegas Raiders, it’s a time for the organization and its fans to reflect on what was gained this season and what still needs to be done.

Instead of a sappy “year in review” type missive, I wanted to use this space to address what is increasingly a volatile and toxic dialogue about the Raiders happening amongst its fanbase. It’s a back-and-forth focused primarily on one subject – quarterback Derek Carr.

While not completely unexpected due to the focus on Carr heading into 2019, much like the political climate in our country, the two sides seem to be getting even more polarized.

We’ve talked about Carr the last several weeks on our show giving our listeners on CBS Sports Radio 1140 a balanced overview of the criticisms of Carr – both fair and unfair. Unlike many in Raider Nation who are either labeled as “haters” for even the slightest criticism of Carr or “Stans” (which the Urban Dictionary defines as a “crazed or obsessed fan…who goes to great lengths to obsess over a celebrity) if they defend the quarterback, we’ve tried to present and discuss both sides of the spectrum.

When it comes to any player, coach, or team executive, rarely will you find 100-percent agreement on anything amongst Raider Nation. That’s what makes fandom so beautiful – everyone has an opinion and they’re not afraid to express it.

With the Carr question, all bets are off.

And while there are merits on both sides of the argument, it has divided the world’s best fanbase at a time when the franchises’ best days lie ahead.

After the shock and anger that was the relocation from Oakland to Las Vegas subsided, you would think Raider Nation would be more united. A sparkling new Allegiant Stadium is on schedule to open in August of the coming year, the team will also move into its state-of-the-art new headquarters and training facility this coming summer, and despite failing to make the playoffs or having a winning record, the team got better and welcomed a great rookie class.

Despite all of these elements trending in the right direction, Carr is dividing a large majority of the fanbase and it’s really too bad.

For those that believe Carr is the Raiders quarterback for now and the future, their opinion is bolstered by numbers and year-over-year improvement. Carr did get better his second year in coach Jon Gruden’s offensive scheme and it resulted in almost doubling the team’s wins from 2018. During the team’s 6-4 start, Carr was efficient and effective leading his team. He was markedly more confident (look at the Bears game in London) and seemed to be correcting many of the flaws he was chastized for in 2018. Statistically speaking, Carr had a great year.

For those who believe Carr should be jettisoned – or at very least challenged with competition from another QB – this offseason, they too have evidence to back their view. After that impressive 6-4 start, the Raiders went 1-5 to end the season and their offense was putrid. Sheer numbers don’t matter when you don’t score. Carr led his team up and down the field but could not lead them into the end zone enough. Despite being in the Top 15 of NFL offenses, the Raiders were 24th in scoring. Their complete ineptitude on offense during the second half of games was shocking. Oh, and the cold weather thing.

Perhaps the biggest negative that fuels those that believe the Raiders should find a new franchise quarterback is optics. When Carr fails to extend plays, throws the ball into the ground a bit early on plays that break down, doesn’t go through progressions failing to see wide-open receivers downfield, it’s very easy to see why fans and observers who don’t believe in him pounce.

Looking at it from the perspective of an objective observer who has covered the team the past three seasons, I see the validity of arguments on both sides. I don’t have the emotional connection fans have over the subject so the inflammatory nature of the two sides is hard to understand.

Look, I get it. Both of your sides have dug in their heels and aren’t willing to give in on their black and white view of Carr at quarterback. But in doing so, right now, I think fans are missing out on what is an amazingly exciting time for this team.

In addition to all of the goodness that comes with the move to Las Vegas, the team also has a huge NFL Draft (which they are hosting here in Vegas) and lots of cash to improve via free agency. Despite having just gone through the “Dark Ages” of being Raiders fan the past 18 years, it’s a great time to be a member of Raider Nation.

Instead of celebrating the future, many fans are too busy fighting a Raider Nation civil war over Derek Carr.

Perhaps it’s just a temporary affliction and a truce is forthcoming. After all, it was a long and emotional season and it didn’t end well. Fans are ornery and it seems Carr as the lighting rod helps them cope.

Whether or not Derek Carr will see the end of his contract as a Las Vegas Raiders quarterback is unknown. And perhaps that also fuels the infighting. I believe there is no question Carr will be under center when the Raiders open Allegiant Stadium at the start of the 2020 regular season.

Either way, Raider Nation can and should disagree at times, but now is a time to come together and celebrate the future in Las Vegas.

No matter who the quarterback is.