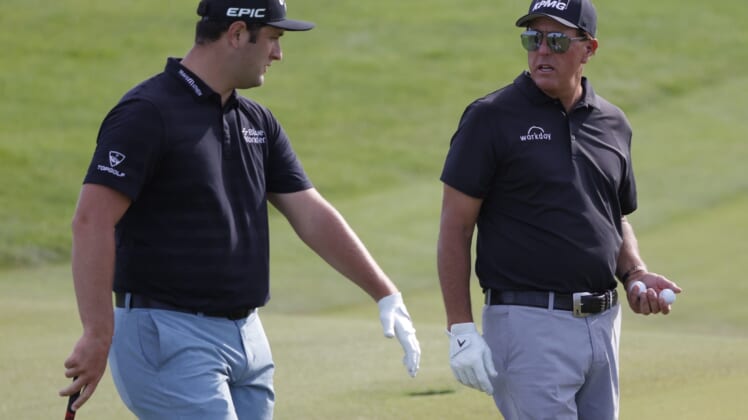 To Jon Rahm, Phil Mickelson’s controversial comments about and potential involvement with a Saudi-backed golf tour are not enough to tarnish his legacy in the sport.

Rahm told reporters Tuesday ahead of the Mexico Open that Mickelson “has given his life to golf,” adding that the six-time major champion does need to show remorse in order to move past the situation.

“Everybody makes mistakes and everything can be rectified, and I believe that can happen, but that has to come from him as well,” Rahm said. “I think if they start realizing everything he has done in his career since he started, I think a lot of people would understand a little bit more where he’s coming from.”

Mickelson came under fire for remarks he made about the so-called Super Golf League, now the LIV Golf Invitational Series, backed by Saudi financiers. He told author Alan Shipnuck that the Saudis were “scary (expletives) to get involved with” with a “horrible record on human rights,” but he intended to work with them anyway in an attempt to gain leverage with the PGA Tour on financial matters.

After issuing a mea culpa in February, losing multiple sponsors and saying he needed “time away” from the sport, Mickelson went silent and did not play in the Masters.

This week, his representatives released a statement saying the 51-year-old has registered for the PGA Championship and the U.S. Open and filed a request to play in the first event of the LIV Golf Invitational Series. But Mickelson has not made a final decision of which events he will play.

PGA Tour commissioner Jay Monahan has threatened lifetime bans for players who opt for LIV Golf, which had been considered a rival league before the company announced a scaled-back, eight-event schedule for the first season.

“I know he’s in a bit of a slump right now, for whatever that may be, but I don’t think his whole career or legacy should change because of a couple of comments.”

Rahm’s opinions are in line with other PGA Tour players like Rory McIlroy, who was critical of Mickelson in February but later said “we all make mistakes” and expressed hope Mickelson could come back to the PGA Tour at some point.