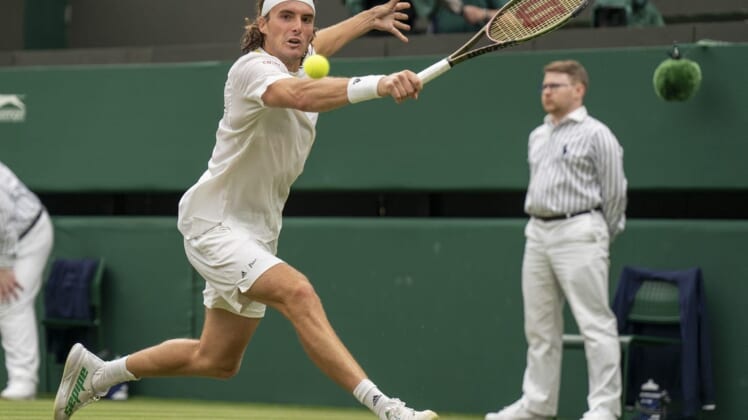 Second-seeded Rafael Nadal lost a set Thursday but continued on to a 6-4, 6-4, 4-6, 6-3 win over Ricardas Berankis of Lithuania to reach the third round of Wimbledon in London.

“Every day is a challenge, that’s the truth,” Nadal said. “All the opponents are difficult. We are playing against the best players of the world and especially even in these conditions, it will be more (difficult). I didn’t play much on grass for the past three years.

“Every day is an opportunity to improve and today I’m through, so that gives me the chance to keep going. Very happy for that.”

Nadal had 35 winners but committed more unforced errors (39) while winning a Grand Slam singles match for the 307th time. He had been tied with Martina Navratilova for fourth all-time.

Berankis had 35 winners and 35 unforced errors.

Fourth-seeded Stefanos Tsitsipas of Greece advanced with a 6-2, 6-3, 7-5 win over Jordan Thompson of Australia.

Tsitsipas has a 29-13 edge in winners while dispatching Thompson.

“I feel grass suits my game perfectly,” Tsitsipas said. “I am happy when I see the level of tennis I played today. As long as everything works, I am happy to see where that will lead me.”

Tsitsipas will next face controversial Australian Nick Kyrgios, who knocked off No. 26 seed Filip Krajinovic 6-2, 6-3, 6-1.

Kyrgios ripped off 24 aces while dismantling Krajinovic. He had 50 winners against just 10 unforced errors.

“I want to remind people that I’m pretty good,” Kyrgios said in a deadpanned mode during his on-court interview. “This is the tournament I circle on my calendar, which I look forward to all year. It’s the Grand Slam where I have the best opportunity.”

Colombia’s Daniel Elahi Galan won in a walkover when 17th-seeded Roberto Bautista Agut of Spain withdrew after testing positive for COVID-19. He joins Matteo Berrettini and Marin Cilic as players who pulled out after positive tests.

Other winners include No. 21 seed Botic van de Zandschulp of the Netherlands and No. 29 Jenson Brooksby.