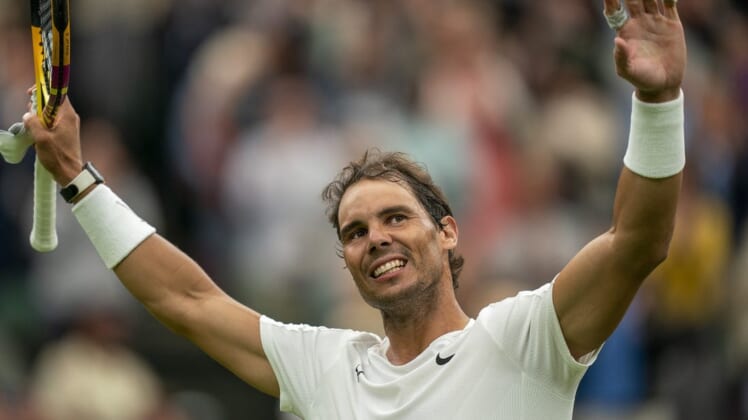 Second-seeded Rafael Nadal booked a spot in the Wimbledon quarterfinals for the eighth time by posting a 6-4, 6-2, 7-6 (6) triumph over No. 21 seed Botic van de Zandschulp on Monday in London.

Nadal committed half as many unforced errors as his opponent from the Netherlands — 17 to 34 — while winning in two hours and 21 minutes.

The Spaniard will face 11th-seeded Taylor Fritz in the quarterfinals. Fritz notched a 6-3, 6-1, 6-4 victory over Australian qualifier Jason Kubler to reach a Grand Slam quarterfinal for the first time.

Nadal had some nervous moments late in his match. He held a 5-2 lead in the third set and lost the next three games.

Nadal also blew three match points during the tiebreaker before converting his fourth to end the match.

“Botic has been improving unbelievably in the last year, so huge congratulations to him (on) this amazing improvement,” Nadal said afterward. “In a personal way, after all the things that happened the last couple of months, to be able to be in the quarterfinals at Wimbledon after three years without playing here, it’s amazing for me, so I’m very, very happy.”

Fritz scored one of his biggest career victories earlier this year when he defeated Nadal in straight sets to the win the ATP 1000-level crown at Indian Wells.

Against Kubler, Fritz served 16 aces among his 40 winners while delivering a crisp effort.

“A first Grand Slam quarterfinal, it’s a really big deal,” Fritz said during his on-court interview. “To be a part of the final eight, and I’m glad I could get the win on the Fourth of July, being an American. It’s great, being in my first quarterfinal. It just shows that all the hard work I’m putting in is paying off.”

Australian Nick Kyrgios and Chile’s Cristian Garin will square off in another quarterfinal match.

Despite a sore right shoulder, Kyrgios racked up a whopping 35 aces in a battle that took three hours and 11 minutes. He had a 79-37 advantage in winners.

It marks the second time Kyrgios has reached the quarterfinals at Wimbledon (2014). It also marks his first Grand Slam quarterfinal since reaching the final eight at the Australian Open in 2015.

“First I want to say, a hell of an effort by Brandon. Just 20 years old to do that,” Kyrgios said during his on-court interview. “It was anywhere near my best performance, but I fought really hard and I am super happy to get through.”

Garin will be playing in his first career Grand Slam quarterfinal after his stirring comeback victory that took four hours and 34 minutes.

“I just gave everything I have. It was a very tough fight. It was a battle,” Garin said. “I think Alex is an incredible player, for me one of the best on grass.

“I am exhausted. I just gave my best, and I think in the fifth set it was for him or for me. We both fought a lot.”

Garin, who had to save two match points in the fifth set, had a 56-31 edge in winners but also committed 72 unforced errors to de Minaur’s 50.