Rafael Nadal is heavily favored to claim his 14th French Open title despite having two of the top six seeds standing between him and more history at Roland Garros.

Nadal first needs to get by rival Novak Djokovic, who survived a dramatic quarterfinal against Matteo Berrettini to set up the 58th meeting between the two. The top-seeded Djokovic leads the all-time series 29-28, but No. 3 seed Nadal has never lost a semifinal at Roland Garros.

Nadal did have his 36-set winning streak on the Parisian clay come to an end in his four-set quarterfinal win over Diego Schwartzman.

Nadal is 10-6 vs. Djokovic in Grand Slam events, including a 7-1 mark at Roland Garros. The upcoming match will be their first semifinal meeting since Wimbledon 2018.

“Each time we face each other, there’s this extra tension, expectations and just vibes are different walking on the court with him,” Djokovic said after his match. “That’s why our rivalry has been historic for this sport and I’ve been privileged to play him so many times.

“Rivalries with him and Roger (Federer) have made me a stronger player and allowed me to understand how I need to improve my game to get to the level where they were when I actually started playing professional tennis. I’ll probably pick Raffa as the biggest rival that I’ve ever had in my career. The anticipation for the match against him, any match on any surface on any occasion is always different from any other.” 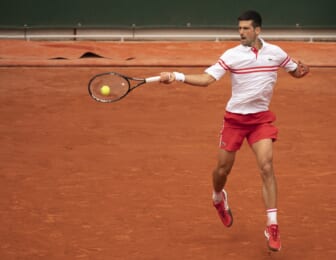 The other semi will pit fifth-seeded Stefanos Tsitsipas against sixth-seeded Alexander Zverev.

The 22-year-old Tsitsipas is in the French Open semifinals for the second straight year, having lost to Djokovic last year. Zverev, 24, beat Tsitsipas in the Acapulco final in March, but it is Tsitsipas who holds a 5-2 edge in their meetings.

“It’s nice that I didn’t play Rafa or Novak in the quarterfinals,” Zverev said. “(But) I think playing Rafa here in the finals, for example, is even worse. It’s even more difficult. But I also need to get there first.”

Despite four of the top six seeds reaching the finals, there is no doubt that Nadal is the overwhelming favorite. He is being offered at -190 to win the title by BetMGM, followed by Tsitsipas (+400), Djokovic (+450) and Zverev (+900).

Zverev is seeking his first grand slam title. He was up two sets in last year’s U.S. Open final before wilting and losing to Dominic Thiem of Austria.

“The Grand Slams are the tournaments that we want to win the most,” Zverev said. “Before maybe the past few years, I was putting too much pressure on myself. Before (Daniil) Medvedev and Tsitsipas arrived, I was seen as this guy who was going to all of a sudden take over the tennis world. I was putting pressure on myself as well.”