Rafael Nadal breezes to win in first-round match in Paris 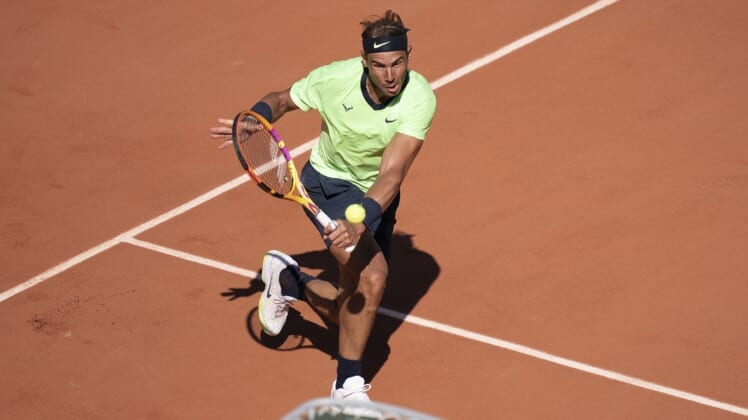 Rafael Nadal began defense of his French Open title in grand style with a 6-3, 6-2, 7-6 (3) victory over Alexei Popyrin of Australia on Tuesday.

Nadal, a 13-time French Open champion, improved to 101-2 in Paris after dispatching the 21-year-old Popyrin in two hours and 26 minutes.

The third-seeded Nadal, in fact, said he wasn’t nervous when forced to save two set points in the third set of the first-round match.

“We are playing best-of-five. The other player needs to win two more sets to beat you, and I know I am going to be there fighting for every single point,” the 34-year-old Spaniard said. “Of course I don’t want to lose the set at all, but that’s part of the game. You face a player that (has) decided to go for every shot, so you are in trouble. If he’s having success like he did with his serve, then it’s difficult to have breaks, and then you are in a tricky position.”

Also on Tuesday, top-seeded Novak Djokovic saved all six break points he faced in a 6-2, 6-4, 6-2 victory over Tennys Sandgren.

Seventh-seeded Russian Audrey Rublev was bounced from the tournament after nearly overcoming a two-set deficit in his loss to Jan-Lennard Struff. The German regained his composure and secured a 6-3, 7-6 (6), 4-6, 3-6, 6-4 victory in a match that lasted three hours and 49 minutes.

“It was definitely a very, very tough match,” said Struff, who registered 25 aces. “I played Andrey twice this year (at the ATP Cup and the Internazionali BNL d’Italia in Rome), lost twice in three sets, played twice a very good first set, but I couldn’t get the job done.

Rublev lamented his chance at completing the comeback.

“Of course I was thinking that I would like to come back from 0-2 (sets down),” Rublev said. “In the fifth set, I was a bit unlucky.”