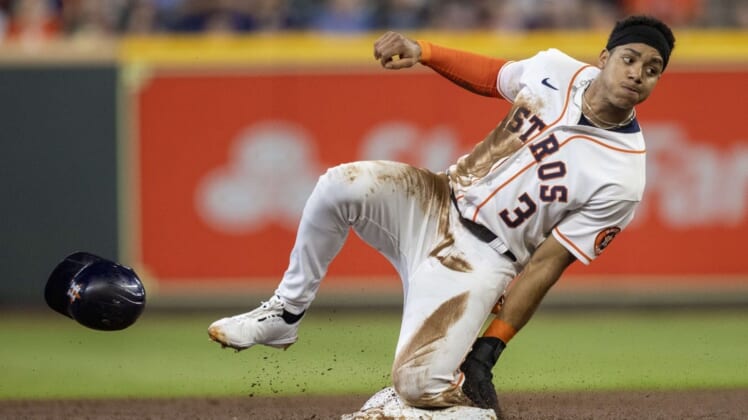 Rafael Devers made an impactful return from the injured list while Kutter Crawford produced a fifth consecutive solid start as the visiting Boston Red Sox topped the Houston Astros 2-1 on Tuesday.

Devers, reinstated from the IL earlier Tuesday after missing 10 games with right hamstring inflammation, drove in both runs against Astros right-hander Cristian Javier (6-7). His run-scoring double in the fourth inning drove home Tommy Pham and tied the game at 1-1.

Devers struck an even bigger blow in his next at-bat, recording his 23rd home run by driving a 3-1 fastball from Javier into the right field seats with two outs in the top of the sixth. His 371-foot blast had an exit velocity of 108.4 miles per hour. Devers finished 2-for-4 with two RBIs.

Javier was otherwise exceptional. He surrendered two runs on four hits and one walk with seven strikeouts over six innings, a bounce-back performance following a string of wobbly performances. Javier, who surrendered a single to Pham in advance of Devers’ double and a single and walk to Bobby Dalbec, had not recorded more than 15 outs in any of his prior four starts. He threw 97 pitches, 67 for strikes, and recorded 10 swings and misses on his fastball.

However, Javier was outdone by Crawford (3-3), who found trouble early but sidestepped issues throughout his six-inning stint.

Crawford faced the minimum only twice, in the second and third innings, and was bolstered by an accurate throw from catcher Kevin Plawecki that cut down Jeremy Pena attempting to swipe second base for the first out of the third.

Crawford, who allowed a leadoff double to Jose Altuve and a run-scoring single to Yuli Gurriel before recording an out in the first, retired six consecutive batters after Pena was erased. He worked past a pair of two-out singles in the fourth and another two-out hit in the fifth.

Alex Bregman opened the bottom of the sixth with a single, but Crawford induced a pair of grounders before Pena lifted a harmless fly ball to center for the final out of that frame.

Crawford allowed one run on seven hits and one walk with six strikeouts. Boston reliever Tanner Houck retired Aledmys Diaz and Pena with two runners on to complete the eighth inning. Houck returned and worked a perfect ninth for his eighth save.