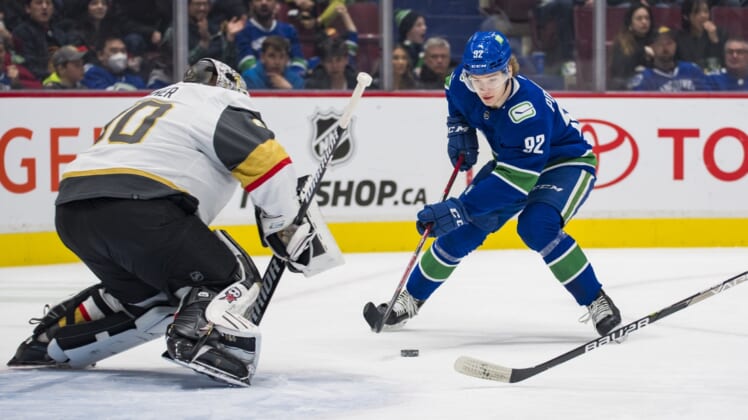 Quinn Hughes backhanded in a rebound 51 seconds into overtime to give the Vancouver Canucks a 5-4 victory over the visiting Vegas Golden Knights on Tuesday night.

Conor Garland set up the score with a wrist shot that Vegas goaltender Robin Lehner stopped with a pad save. However, the rebound went in front of the crease, where Hughes picked it up and outwaited Lehner before flipping the backhand shot into an open right side of the net for his sixth goal of the season.

Elias Pettersson had a goal and two assists, Bo Horvat and Hughes each had a goal and an assist and Vasily Podkolzin and Brad Richardson also scored goals for Vancouver (36-28-10, 82 points), which won its fourth straight game. Garland added two assists, and Thatcher Demko made 41 saves.

Shea Theodore scored two goals, Alec Martinez had a goal and an assist and Michael Amadio also scored a goal for Vegas (40-29-5, 85 points), which dropped three points behind Dallas for the final Western Conference wild-card spot. Lehner stopped 22 of 27 shots.

Vancouver took a 1-0 lead on the first shot of the game 64 seconds into the contest on a power-play goal by Horvat. After a pass from Alex Chiasson passed to the front of the net, Horvat roofed a shot under the crossbar for his 31st goal of the season.

Martinez tied it at the 16:59 mark of the first with his first goal of the season. He deflected a Mattias Janmark shot past Demko.

The teams produced three goals in the span of 2:59 early in the second period as Vancouver moved back in front 3-2. Podkolzin got the first on the power play for his 11th goal of the season, sweeping in a rebound of his own shot that had bounced off the left post.

Pettersson made it 3-1 at 3:16 with his 26th goal of the season. His shot caromed off the skate of defenseman Zach Whitecloud and just over the goal line. Referees initially waived off the score, but a video review showed the puck had trickled across the goal line before Lehner pulled it back.

Amadio cut it to 3-2 with his ninth goal of the season 70 seconds later when he redirected Jonathan Marchessault’s spinning shot from the top of the left circle.

Richardson put Vancouver back up by two goals at the 13:03 mark of the middle period. He finished a two-on-one rush by tapping in Pettersson’s crossing pass from the left wing for his fourth goal of the season.

Theodore cut it to 4-3 at 5:27 of the third period, sending a wrist shot from the right faceoff dot past Demko’s blocker side. The Golden Knights nearly tied it three minutes later, but Alex Pietrangelo’s wrist shot from the high slot bounced off the crossbar.

Vegas pulled Lehner with 1:45 to go, and Theodore tied it with 41.4 seconds left. His one-timer from the top of the right circle went over Demko’s glove, sending the contest into overtime.