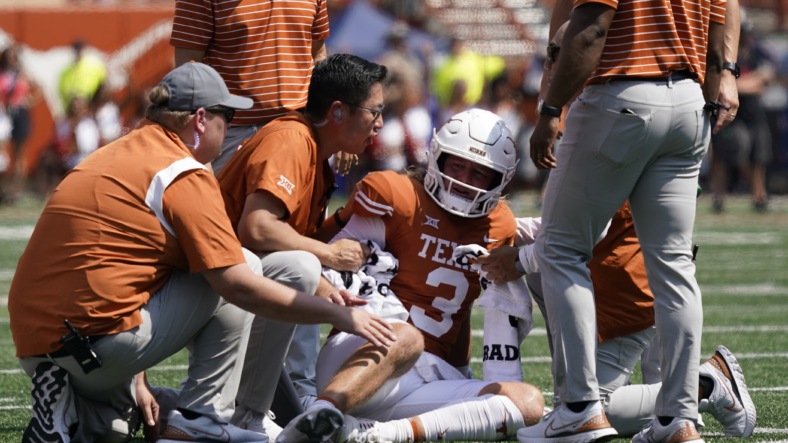 For Quinn Ewers, his college career with the Texas Longhorns couldn’t have started much better after a dominant 52-10 victory in Week 1. Then, the Alabama Crimson Tide came to town. Yet, Ewers was holding his own against the top-ranked team in the nation too, completing 9-of-12 passes, keeping his Longhorns in the game near the end of the first quarter.

Unfortunately, his reign wouldn’t last long. Ewers quickly suffered what appeared to be a shoulder injury on a hit from Crimson Tide linebacker Dallas Turner. He immediately left the game, with the Longhorns trailing 10-7, but in the red zone. Backup quarterback Hudson Card was his replacement.

According to ESPN’s Pete Thamel, Ewers is expected to miss anywhere from 4-to-6 weeks with what’s being called a sternoclavicular (SC) sprain.

Card would go on to complete 14-of-22 passes while doing just enough to keep Texas in the game, but would eventually lose on a last-second field goal kick by Alabama.

Sophomore QB Hudson Card is next man up

Now the Longhorns turn to sophomore quarterback Hudson Card, a former four-star recruit who was battling Ewers for the starting role in training camp. Card even played in seven games a season ago, so he does have some experience, but he doesn’t have the same ceiling as Ewers.

Card can be effective in on RPO actions, but his arm won’t match what Ewers offers, which could hold back Xavier Worthy from breaking loose deep downfield. He won’t have trouble moving the chains, but anyone hoping for Texas to have a potent passing offense shouldn’t hold their breath for as long as Ewers is sidelined.