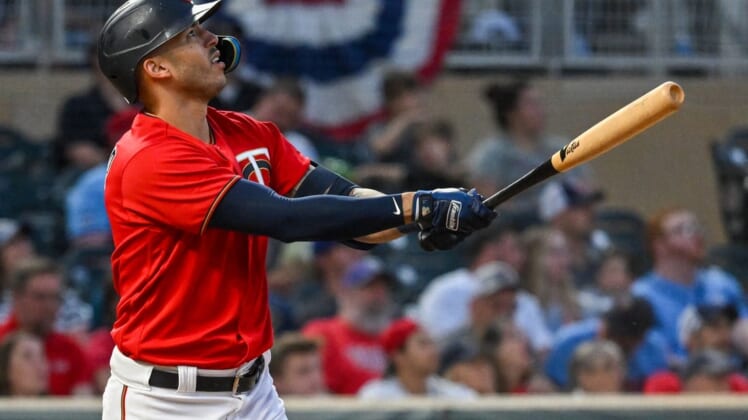 The Royals tied the game in the fourth inning, but the Twins answered immediately to retake the lead and then pulled away late with another four-run inning.

Bobby Witt Jr. finished a double shy of completing the Royals’ first cycle since George Brett had one in 1990.

Minnesota reliever Trevor Megill (1-1) came into the game with the bases loaded and one out in the fourth and induced an inning-ending double play to keep the game tied. He then completed two more scoreless innings to earn the win.

Emilio Pagan got the final out in the ninth for his seventh save.

Kansas City starter Brad Keller (1-5) gave up six runs on 11 hits in four innings. He has allowed at least four runs in his last two starts against the Twins after never giving up more than three earned runs in nine previous career starts against Minnesota.

Luis Arraez led off the Minnesota first with a single. With one out, Polanco launched a home run to right, his fifth of the season. Later in the frame, Gio Urshela and Nick Gordon each drove in a run with a two-out single.

The Royals got back into the game in the third on a two-out, two-run triple from Witt. Hunter Dozier followed with an RBI single.

Minnesota starter Bailey Ober lasted just three innings after throwing 31 pitches in the third. He gave up three runs on five hits and a walk with five strikeouts.

The Royals then tied it in the fourth on an excuse-me single by Lopez that scored Ryan O’Hearn.

The Twins responded in the bottom of the fourth. Carlos Correa led off with a home run to left, his third. Polanco and Gary Sanchez singled, Sanchez’s four straight hit over the past two games. Larnach drove home Polanco with a sacrifice fly.

Witt homered leading off the seventh to draw Kansas City within 6-5. It was his sixth long ball of the year.

The Twins scored four runs in the eighth on an Urshela RBI single, a Gordon two-run double and an Arraez run-scoring single.

The Royals scored twice in the top of the ninth and a solo homer from MJ Melendez, his fourth, and an RBI double from Emmanuel Rivera. Pagan then replaced Yennier Cano on the mound and struck out Nicky Lopez to end the game.