When the Golden State Warriors fired Mark Jackson following the 2013-2014 season, most people weren’t caught by surprise. The issue wasn’t a lack of on-court success. Jackson had just led a previously dormant Warriors organization to its first 50-win season since 1994. Instead, it was all about Jackson’s inability to coexist with the front office.

Even then, some concluded it was a foolish decision. Jackson’s squads tallied 98 wins in the previous two years—13 more than the three seasons before that combined.

In a stunning development, first-year head coach Steve Kerr led the Warriors to one of the top-10 regular season records (67-15) in NBA history this year. While this might lead some to believe first-year coaches can have a ton of success out of the gate, Kerr’s situation was an exception to the rule. One of the Warriors primary issues with Jackson was his unwillingness to bring on veteran assistants. That wasn’t a problem with Kerr, who brought on two seasoned assistants to the Warriors staff. Ron Adams (23 years) and Alvin Gentry (25 years) are Kerr’s most-veteran assistants. You can even ask the Warriors head man, and he will tell you just how important they have been to the team’s success.

Again, Golden State is an exception to the rule. It became a perfect storm for the franchise. The team brought in an inexperienced coach who was willing to give up some power to savvy assistants. That’s not par for the course around the Association.

Another thing that’s not par for the course around the NBA is first-year head coaches having success.

Just look at this season as an example. Outside of Kerr in Oakland and David Blatt with the Cleveland Cavaliers, it’s been pretty ugly.

Only two of these teams, Milwaukee and Brooklyn, earned a trip to the playoffs. And that was in an Eastern Conference that saw a squad earn a playoff spot at six games under .500.

There’s no argument that the teams listed above weren’t in a good position in the first place. With an exception of the Jason Kidd “trade,” none of these squads were serious playoff contenders when they fired their former head coaches.

But that’s the ultimate point here. Cutting ties with a coach after a short stint while expecting an immediate turnaround is definitely a fool’s plan.

Look at the Sacramento Kings for a second. They fired former head coach Mike Malone just 24 games into his second year. They did so despite him possessing an 11-13 record. In the 58 games that followed the Malone firing, Sacramento put up an 18-40 record.

The Detroit Pistons also come to mind. They were so quick to move on from Lawrence Frank after two seasons. Frank may have put up a .365 winning percentage in 2011-2012 and 2012-2013, but the Pistons haven’t done much since. Maurice Cheeks and John Loyer shared duties during the 2013-2014 campaign, finishing with a 29-53 record—the same mark Frank put up his final season. And in order to make a huge splash, Detroit hired Stan Van Gundy to be its head coach this past summer. He proceeded to put up a 32-50 record. Four coaches in four years, and an increase of just seven wins from Year 1.

We can run up and down the list of recent head-coaching firings and come to the same conclusion. It’s a conclusion that probably doesn’t bode well for the New Orleans Pelicans and Oklahoma City Thunder, both of whom fired their coaches after earning a playoff spot this season. 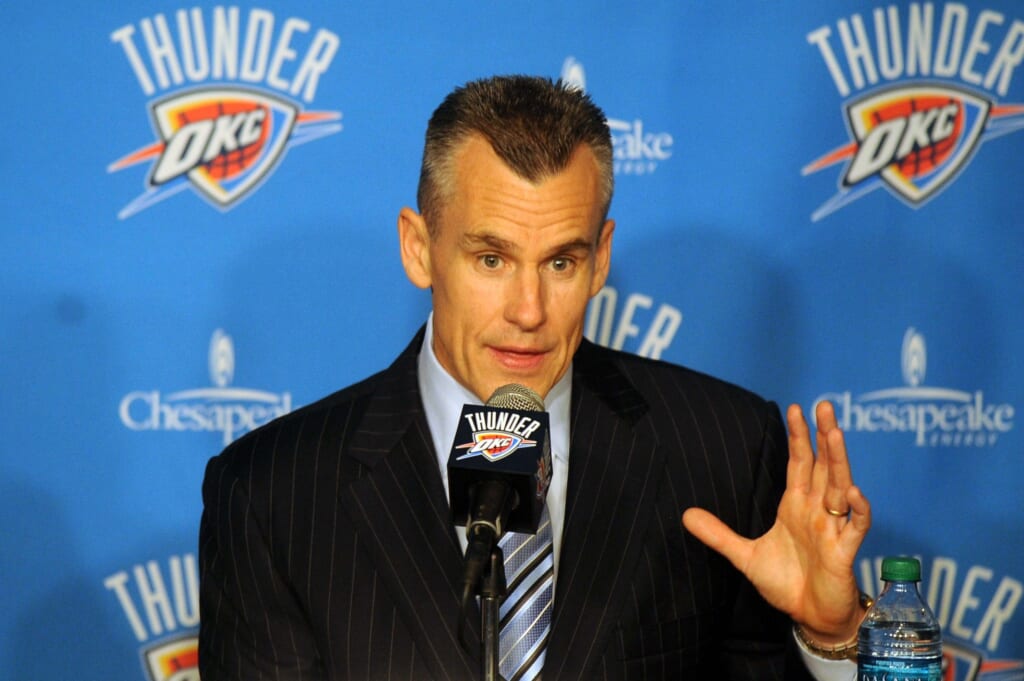 Courtesy of USA Today Sports: Billy Donovan will be under immediate pressure in Oklahoma City.

For the Thunder, Billy Donovan is going to have to find the right mix of veteran assistants in order to even come close to repeating the success Scott Brooks had prior to an injury-plagued 2014-2015 campaign. As history proves, if general manager Sam Presti thinks this is going to be an easy transition, he’s sorely mistaken. Kevin Durant and Russell Westbrook won’t be enough to lead the Thunder to a title. They are going to need a solid plan on a nightly basis in order for them to come out of the ultra-competitive Western Conference.

Donovan is also going to be under enormous pressure to win early and often. Much like Kerr in Golden State, the former Florida head coach is taking over for a head coach that turned his new franchise around. It’s going to be a difficult task.

As it relates to the Pelicans, their firing of Monty Williams made no real sense. He had led the team to an increase in wins in each of the past three seasons, including a playoff spot this year. It appeared that Williams would be the guy to lead Anthony Davis and company into contention in the West. However, the organization had a different plan. If it’s the big hire New Orleans is going after, that’s fine. It just can’t realistically expect to land another Steve Kerr. And if for some reason it is able to, that coach will then have to create the staff to compete. It’s not an ideal situation for an up-and-coming franchise.

It used to be that coaches had three years to prove their worth to an organization. That has obviously changed in the modern era. In fact, we have seen coaches get the ax in just over a year in recent seasons. If that continues to be the case, those teams we mentioned above will find themselves in a never-ending coaching search every other year. It’s that cycle that will force franchises to remain irrelevant over the long haul.