Qualifier earns crack at No. 1 Daniil Medvedev in Indian Wells 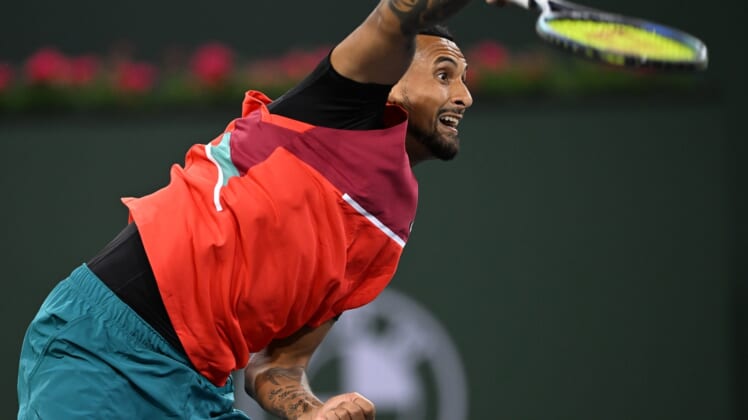 His reward? A second-round match against top-ranked and top-seeded Daniil Medvedev of Russia.

Machac, ranked 158th in the world, defeated Australia’s Alexei Popyrin 6-3, 7-5 in 1 hour, 45 minutes. The 21-year-old will be facing Medvedev, 26, for the first time. The tournament’s top 32 seeds all received first-round byes.

Elsewhere in the opening round, Australia’s Nick Kyrgios, appearing in just his second tournament of the year, routed Argentina’s Sebastian Baez 6-4, 6-0 in 72 minutes.

Regarding 21-year-old Baez, Kyrgios said, “He’s had a great couple of months. He’s No. 60 in the world for a reason. He’s a young guy, he’s got a great future.”

Kyrgios’ only previous singles action this season came at the Australian Open, where he lost in the second round to eventual finalist Medvedev. However, Kyrgios teamed with countryman Thanasi Kokkinakis to win the doubles title in Melbourne.

The first day of men’s singles play in Indian Wells also featured an all-Serbian matchup, an all-French matchup and an all-U.S. matchup.

Filip Krajinovic got past Serbian countryman Dusan Lajovic 7-5, 4-6, 6-1. Benjamin Bonzi defeated Arthur Rinderknech 6-3, 7-5 in a showdown between Frenchmen, and Christopher Eubanks got the best of an all-American clash against Maxime Cressy, 5-7, 7-6 (8), 6-4.

Cressy couldn’t take advantage of three match points in the second-set tiebreaker before Eubanks converted his second set point. Eubanks got the lone service break of the third set for a 2-1 lead and never faced a break point again en route to the win.