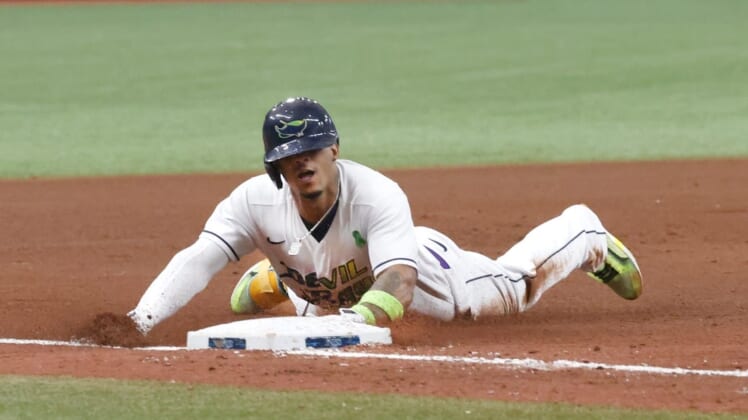 Just as he had pulled out of an extended hitting slump, Tampa Bay Rays shortstop Wander Franco was placed on the 10-day injured list Tuesday due to a strained quadriceps.

Franco left Monday’s game in Texas in the ninth inning after rounding first base, pulling up when he felt his right quad tighten. He had been dealing with several quad and hamstring injuries in recent weeks and had missed a couple game to rest.

Franco had three hits and a walk in five plate appearances Monday, seemingly ending a slump in which he had six hits and two RBI in 61 at-bats (.107) across a 16-game stretch. Before that slump, Franco started the season strong, batting .331 with 15 RBI in 28 games.

In all, Franco is hitting .270 this season, with 48 hits in 45 games. The 21-year-old finished third in Rookie of the Year voting last season.

The Rays selected the contract of veteran right-handed relief pitcher Shawn Armstrong from Triple-A Durham to replace Franco on the active roster, and designated lefty Ben Bowden for assignment to open a spot on the 40-man roster for Armstrong.

Armstrong signed with the Rays earlier in May after being released from the Miami Marlins. In eight major-league seasons, Armstrong has been with five teams, including the Rays for part of last season, and has a 5-2 career record with a 4.87 ERA. In seven appearances with the Marlins this season, he had a 10.80 ERA in 6 2/3 innings of work.