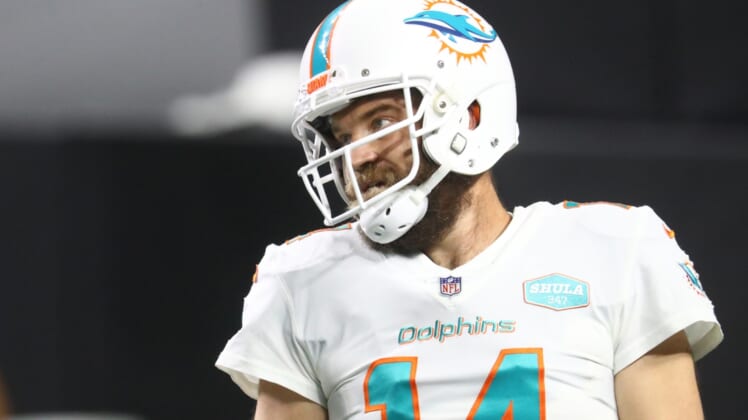 Quarterback Ryan Fitzpatrick agreed to a one-year, $10 million deal with the Washington Football Team, according to media reports Monday night.

Fitzpatrick can earn $12 million in 2021 with incentives, NFL Network and ESPN reported.

Taylor Heinicke re-signed with Washington and is expected to compete for the starting job.

The Washington Football Team moved on from Alex Smith, the NFL Comeback Player of the Year in 2020, as part of a hard reset at the position. During the season, first-round pick Dwayne Haskins was released.

Fitzpatrick, 38, began last season as the starter for the Miami Dolphins. However, rookie Tua Tagovailoa took over in the second half of the 2020 season and is viewed as the future of the franchise.

A seventh-round pick in 2005, Fitzpatrick has played for the Rams, Bengals, Bills, Titans, Texans, Jets, Buccaneers and Dolphins.

He has 34,977 career passing yards and 223 touchdown passes with 169 interceptions. Last season, he went 4-3 as a starter, completing a career-high 68.5 percent of his passes for 2,091 yards with 13 TD passes and eight interceptions.