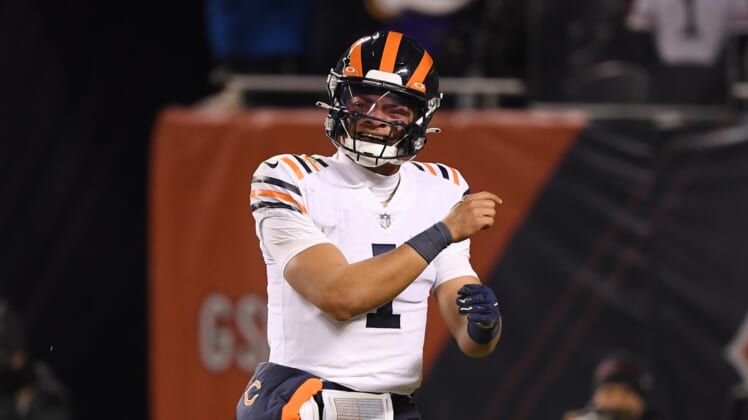 Having started three different quarterbacks in 2021, the Chicago Bears approach Sunday’s game uncertain who will get the call.

Still, they rank ninth in the NFL with 30 drives of at least 10 plays. That’s decent footing for a 5-10 team that has lost three of four entering the game against the visiting New York Giants at Soldier Field.

Third-stringer Nick Foles led the Bears to victory in Week 16 at Seattle as rookie starter Justin Fields (ankle) and backup Andy Dalton (groin/hand) were unavailable. This week, Fields and Dalton returned to practice, leaving Bears coach Matt Nagy with a choice that may require the bulk of the week to play out.

Fields would be the preference of Bears fans as they play out a lost season and build for the future, but Nagy said the rookie would have to be “extremely healthy” for that to transpire.

“Justin is super tough, so we have to balance that,” Nagy said. “We’ve got to make sure he doesn’t hurt himself because he’s trying to tough through something, but he’s also smart, too, and he gets it that we have his best interest (in mind).

New York (4-11) enters on a four-game losing streak while facing its own question mark at quarterback.

Starter Daniel Jones suffered a neck injury in a Week 12 victory against Philadelphia and has been shut down for the season. That left the QB duties first to veteran Mike Glennon, then to second-year pro Jake Fromm, and Giants coach Joe Judge said the duo would split time this week.

Fromm, signed off the Buffalo Bills’ practice squad on the heels of the Jones injury, made his first NFL start last week. He went 6-for-17 for 25 yards and an interception before being relieved by Glennon, who closed out the 34-10 loss at Philadelphia by going 17-for-27 for 93 yards with one touchdown and an interception.

Glennon, who went 1-3 in four starts for Chicago in 2017, was lukewarm to the idea of a platoon.

“Getting into a rhythm would be a challenge,” he said. “But if that’s what’s best for the team. …”

New York was outscored 31-0 in the second half against Philadelphia before the Giants scored in the last four minutes They continue to contend with fan unrest as the franchise slogs to the finish line of its fifth successive losing season and eighth in the past nine.

“It’s just not OK,” Giants cornerback Logan Ryan said of losing. “Their reaction is OK. The product isn’t OK right now. I take that to heart as a leader of this team.”

Giants running back Saquon Barkley remains on track to play as he works through an ankle injury. Barkley is averaging 3.5 yards a carry this season, a full yard below his career average, and had a long rush of just seven yards against the Eagles last week while gaining 32 on 15 carries.

Barkley gained 28 yards on four carries against the Bears in Week 2 of 2020 but suffered a torn ACL in his right knee on the first play of the second quarter, ending his season. Barkley said he wouldn’t consider resting the final two games of the season with an eye on staying healthy for 2022.