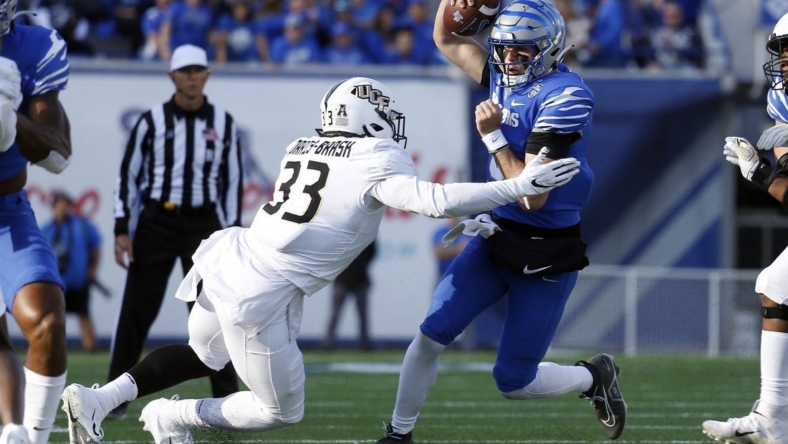 Mikey Keene threw three touchdown passes and RJ Harvey ran for 151 yards and a score on 17 carries to lead No. 25 Central Florida to a 35-28 victory over host Memphis on Saturday.

Keene went 22-for-28 passing for 219 yards with scoring strikes of 24 and 13 yards to Kobe Hudson, who finished with six receptions and 85 yards for the Golden Knights (7-2, 4-1 American Athletic Conference). Keene, who had one interception, also tossed a 24-yard touchdown pass to Javon Baker in the fourth quarter to secure the victory.

Running back Isaiah Bowser also threw a touchdown pass for Central Florida, which won for the sixth time in its past seven games.

Ryan O’Keefe had 10 catches for 75 yards for UCF, which never trailed while handing the Tigers (4-5, 2-4) their fourth straight loss.

Seth Henigan went 26-for-39 passing for 284 yards with a touchdown and two interceptions in addition to rushing for 69 yards and a score on 16 carries for Memphis. Asa Martin finished with seven catches for 61 yards.

Trailing 21-14 at halftime, the Tigers tied the game on Jevyon Ducker’s 1-yard touchdown run that ended an 11-play, 77-yard drive with 6:53 left in the third quarter.

The game remained tied until early in the fourth quarter, when Keene hit Hudson in the back of the end zone for a 13-yard touchdown pass and a 28-21 lead with 12:19 left in the game.

Central Florida ran out the clock on its ensuing possession.

After Harvey’s 22-yard touchdown run gave Central Florida a 7-0 lead on its first possession, the Tigers tied the game on Brandon Thomas’ 7-yard run with 5:59 left in the first quarter.

The Golden Knights regained the lead thanks to Bowser’s 4-yard touchdown pass to Stephen Martin out of the wildcat formation. The short toss finished an eight-play, 89-yard drive with 11:23 left in the first half.

The Golden Knights struck back in less than two minutes, with Keene tossing a 24-yard touchdown pass to Hudson for a 21-14 lead with 6:39 left in the half.