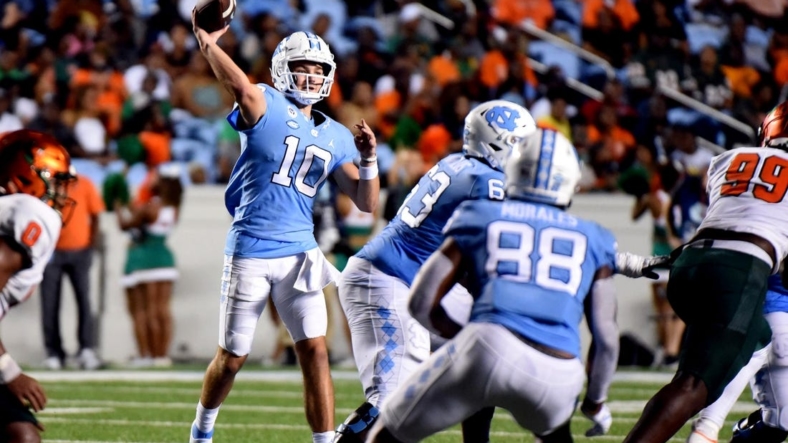 North Carolina quarterback Drake Maye has big shoes to fill, but he fit into them just fine Saturday in his debut for the Tar Heels.

Replacing record-setter Sam Howell, who now is with the NFL’s Washington Commanders, Maye threw five touchdown passes in his team’s 56-24 win over visiting Florida A&M to become the first Tar Heels quarterback to accomplish the five-TD feat in his first career start.

On Saturday, the redshirt freshman and his teammates will travel across the state to face the Appalachian State Mountaineers in Boone, N.C.

The game will be the third between the schools; they split the previous contests at Chapel Hill, N.C.

Announced as the starter by coach Mack Brown last Monday, Maye went 29-for-37 for 294 yards against the undermanned Rattlers, who were playing without 25 players battling eligibility issues and fielded just seven offensive linemen.

“One of the best first games I’ve ever seen,” Brown said. “He was poised. He was accurate. His running ability was good. We did not have a sack.”

But on the opposite sideline in their season opener, the Mountaineers (10-4 last season) will have their own talented quarterback, Chase Brice.

Last week, Brice was named to the watch list for the Johnny Unitas Golden Arm Award, a befitting honor for the sixth-year redshirt senior who established a school-record 3,337 passing yards last season.

He also had 27 touchdown passes and a 62.1 completion percentage in his first season for the Sun Belt school after playing at Clemson for two years and moving on to one season at Duke in 2020.

“Brice’s experience is invaluable,” said Barbay, who was hired from Central Michigan in the offseason. “He’s been in a bunch of different offenses at a high level, he has no ego, and is very good at moving in the pocket.”