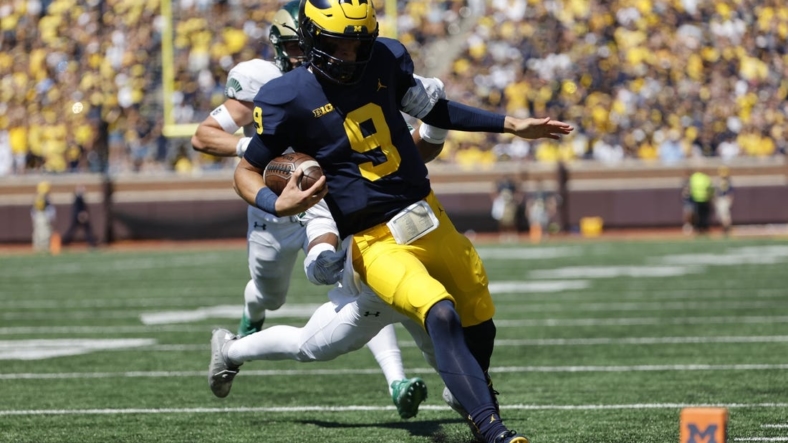 These days, not all of the buzz surrounding Michigan is about wins and losses.

Instead, a quarterback controversy that seems to be growing in intensity heading into a home contest against Hawaii on Saturday night has dominated the conversation around the No. 4 Wolverines.

Coach Jim Harbaugh made it clear before last week’s opener that incumbent starter Cade McNamara would start against Colorado State, but that sophomore 5-star recruit J.J. McCarthy would get the nod against Hawaii.

The cries among those who support McCarthy only grew louder against Colorado State.

In Michigan’s 51-7 win, McNamara went a pedestrian 9-of-18 passing for 136 yards and a touchdown, while McCarthy completed all four of his passes and added a 20-yard touchdown run in a performance Harbaugh described as “electric.”

McCarthy will get his shot to be the No. 1 QB this week, and McNamara seemed to ignite some tension after the Colorado State game by saying Harbaugh’s decision to start both quarterbacks was unexpected.

“I would definitely say it’s pretty unusual,” McNamara said. “It was kind of a thing that I wasn’t expecting. By the end of camp, I thought I had my best camp and put myself in a good position.”

During his weekly press conference on Monday, Harbaugh was complimentary of McNamara’s performance.

“He’s a perfectionist,” Harbaugh said. “So I thought it was a really solid game.”

The quarterback situation certainly is most of the talk with Michigan now, especially since the Wolverines are in the midst of what might be the easiest nonconference schedule of any Power 5 program.

Next up is Hawaii, which is off to an awful start.

The Rainbow Warriors have been blown out twice at home to start the season, first 63-10 by Vanderbilt on Aug. 27 and then 49-17 by Western Kentucky last Saturday.

“You know, we got to play better,” Hawaii coach Timmy Chang said. “I think what’s happening is the mistakes start to happen and it snowballs. So we got to get better.”

The biggest problem offensively for Hawaii has been taking care of the ball. The Rainbow Warriors committed six turnovers against Western Kentucky and have seen turnovers turn into immediate touchdowns for the opposing defense three times this year.

Hawaii also has committed 20 penalties for 181 yards in two games.

“That’s not the team that we want to be,” Chang said. “I think we had two unsportsmanlike (penalties). That’s not a team we want to be. There’s no place for that in Hawaii football. Our guys have to know when you wear that ‘H’ and what we represent, it means something, and that’s not the brand of football we want to play.”

Hawaii hasn’t beaten a Power 5 conference team on the road since 2009.