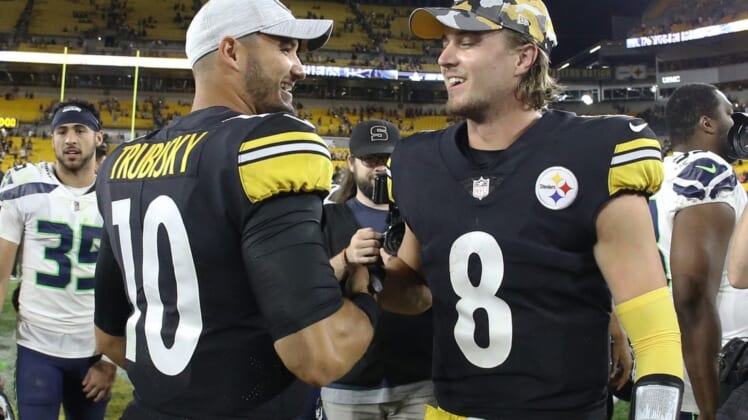 Mitchell Trubisky’s odds to open the regular season as Pittsburgh’s starting quarterback have shortened despite an impressive debut by his first-round rookie counterpart in the Steelers’ preseason opener.

Kenny Pickett fired a last-second touchdown pass in the Steelers’ 32-25 victory over the Seattle Seahawks on Saturday night. His work largely came against the Seahawks’ reserves, but Pickett did finish 13 of 15 passing for 95 yards and a pair of touchdown passes while adding 16 more yards on three carries.

“We were getting hammered on Trubisky as the starter all week so we moved aggressively, going from -250 to -700,” said Robert Cooper, SportsBetting.ag’s head props trader. “Even though Pickett had a solid game and the fans loved him, our betting action suggests we’ll see Trubisky under center in the opener.”

All three Steelers quarterbacks threw touchdown passes, with Trubisky starting the game and going 4-for-7 passing for 63 yards and the opening scoring pass.

The sportsbook still isn’t offering odds on Mason Rudolph, the longtime backup to Ben Roethlisberger who also tossed a touchdown pass on Saturday.

The Seahawks were evaluating their own quarterback battle on Saturday night.

Geno Smith started and led touchdown and field goal drives while his other three drives ended in punts. He was relieved by Drew Lock, who threw two touchdown passes among a few big completions but also suffered a sack-fumble while attempting to lead Seattle to a go-ahead score in the fourth quarter.

“As it turned out, for both guys that was a good outing because they had a lot of pressure on them to have to get things done,” Seahawks coach Pete Carroll said. “We’re coming from behind and drives to go ahead and all that kind of stuff. I’m anxious to see how it looks when we break it down.”

The oddsmakers’ evaluation is that Smith is closing in on the job. He has moved from -175 at SportsBetting.ag on Aug. 5 to -300 on Monday to be the Seahawks’ starter in Week 1.

Lock, who was acquired in the Russell Wilson trade, has seen his odds lengthen from +135 to +200.

The only other quarterback battle the sportsbook is offering odds on is in Carolina. Baker Mayfield is the strong favorite at -500 to beat out Sam Darnold (+300). However, the odds have tightened since Mayfield was installed as the -1500 favorite on Aug. 5 over Darnold (+600).

The sportsbook has removed the competition in Atlanta from the board with Marcus Mariota now holding a greater than 90 percent chance of starting Week 1 in favorite of rookie Desmond Ridder.