It’s been a while since we saw a defending Super Bowl champion find itself without a starting quarterback. But that’s the situation the Denver Broncos are in just over a month after hoisting the Lombardi in Santa Clara.

By now it’s well known where the Broncos are right now.

Future Hall of Fame quarterback Peyton Manning announced his retirement on Monday, ending his four-year tenure with the team.

Meanwhile, Brock Osweiler departed in free agency on Wednesday after signing a four-year, $72 million deal with the Houston Texans on Wednesday.

Now that the Broncos are without their two top quarterbacks, they find themselves in the market for a veteran starter — a market that’s about as watered-down as it gets.

Here are the likeliest options for the Broncos right now and the odds that each one will be under center when the team opens the 2016 season in Denver on Thursday Night Football.

This is the rumor that’s been bandied about the most since Osweiler bolted for the Texans in free agency. It also seems to make the most sense from both a team and player perspective.

Outside of his deteriorating skill-set, one of the primary reasons Manning struggled so much in 2015 is that he was a fish out of water in Denver’s offense. Gary Kubiak’s scheme relies a great deal on roll outs from the quarterback, something Manning simply couldn’t provide.

With the Broncos zone-rush offensive scheme, Kaepernick seems to be a tremendous fit. He would provide the team with that added dimension on offense.

He also reportedly wants to join the Broncos after demanding a trade from San Francisco.

In an interesting turn, most refuse to look at the success Kaepernick had on a team with a dominating defense. Remember, it was only back in 2012 that the former second-round pick led San Francisco to the Super Bowl. Heck, he was one play away from hoisting the Lombardi.

In reality, an argument could be made that Kaepernick would be an upgrade over what the Broncos had at quarterback last season.

Hoyer is on his way out of Houston after the team signed Osweiler on Wednesday. He also has a pretty solid track record of success, including leading the Texans to the playoffs a season ago.

Hoyer would be a cheaper alternative to Kaepernick in that he’s set to make just $4.9 million this upcoming season. He also wouldn’t cost anywhere near as much in terms of compensation in a trade.

Hoyer completed 61 percent of his passes for 2,606 yards with 19 touchdowns and seven interceptions in 11 games (nine starts) for Houston last season. From a pure statistical point of view, that’s an upgrade over what Denver had last season. 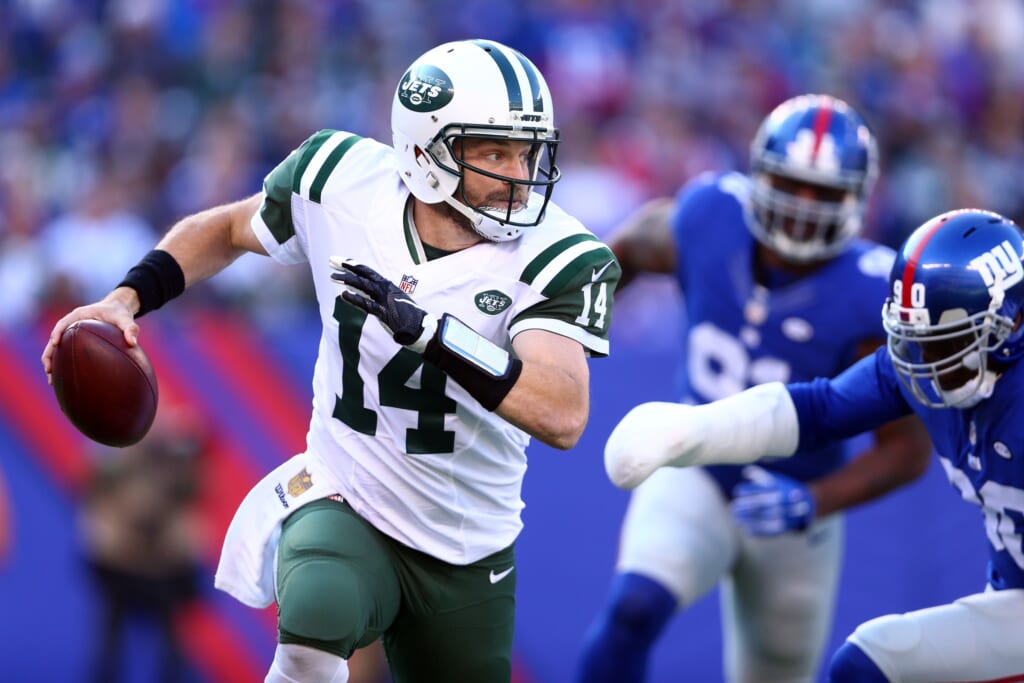 If the Broncos weren’t willing to dole out $18 million per season to Osweiler, it stands to reason the team wouldn’t meet what might be a high asking price from Fitzpatrick on the open market.

What we do know here is that the New York Jets and Fitzpatrick are far apart in negotiations right now. We also know that someone of his ilk will likely get paid on the open market after the deals we’ve seen handed out to lesser quarterbacks on the open market.

If the Broncos were to decide that they need to spend the cash in order to fix what is quickly becoming a huge issue at quarterback, Fitzpatrick might be the best option.

The 11-year NFL veteran had a career-season in 2015, putting up over 3,900 passing yards with 31 touchdowns and 15 interceptions en route to leading the Jets to a surprising 10-6 record.

Selecting 31st overall in the 2016 NFL draft, none of the top-three quarterbacks will be available for the Broncos. Of course, that’s based on the expectation that one won’t see a major draft-day fall come April.

Assuming Jared Goff, Carson Wentz and Paxton Lynch are all off the board, that leaves former Michigan State standout Connor Cook as the only real option at the end of the first round.

Based on Cook’s struggles at the NFL Scouting Combine last month and his unwillingness to attend the Senior Bowl, this would be a perceived reach on Day 1.

Instead, the Broncos could look to potentially trade up for one of those aforementioned Day 1 quarterbacks. While less-than-ideal when it comes to a defending champion starting a rookie, this is the situation Denver finds itself in right now.

The other possibility here is that Denver will just wait and see how things play out in Round 1. At that point, it could consider picking up a potential starter in the second round.

Either way, it makes little sense for the Broncos to rely on a rookie.

Much like Kaepernick, this embattled former franchise quarterback has been linked to the Broncos in recent days. It makes sense for a number of reasons.

First off, RGIII wouldn’t cost any compensation in a trade. He’s a free agent after the Washington Redskins released him earlier this week. Secondly, he’d likely come a lot cheaper than Kaepernick in terms of his contract.

The obvious issue here is a lack of recent success and a laundry list of previous injury issues. Would the Broncos really bank on this former No. 2 overall pick actually remaining healthy while performing at a high level?

More than this, how would RGIII handle the pressure of starting for a team that’s coming off a Super Bowl? In reality, there seems to be too many question marks for this to be considered a real possibility.

Why not? Manning’s retirement press conference from Monday pretty much closed the book on his career. But we have seen this story written over and over again in the past, most recently with Brett Favre.

It’s a story of a Hall of Fame caliber quarterback not knowing when to hang it up. It’s also a story that leads us to the realization that Manning might in fact be the Broncos best option after Osweiler bolted for greener pastures.

While highly unlikely, we really can’t close the book completely on Manning in Denver until the team actually has someone other than Trevor Siemian on the roster. 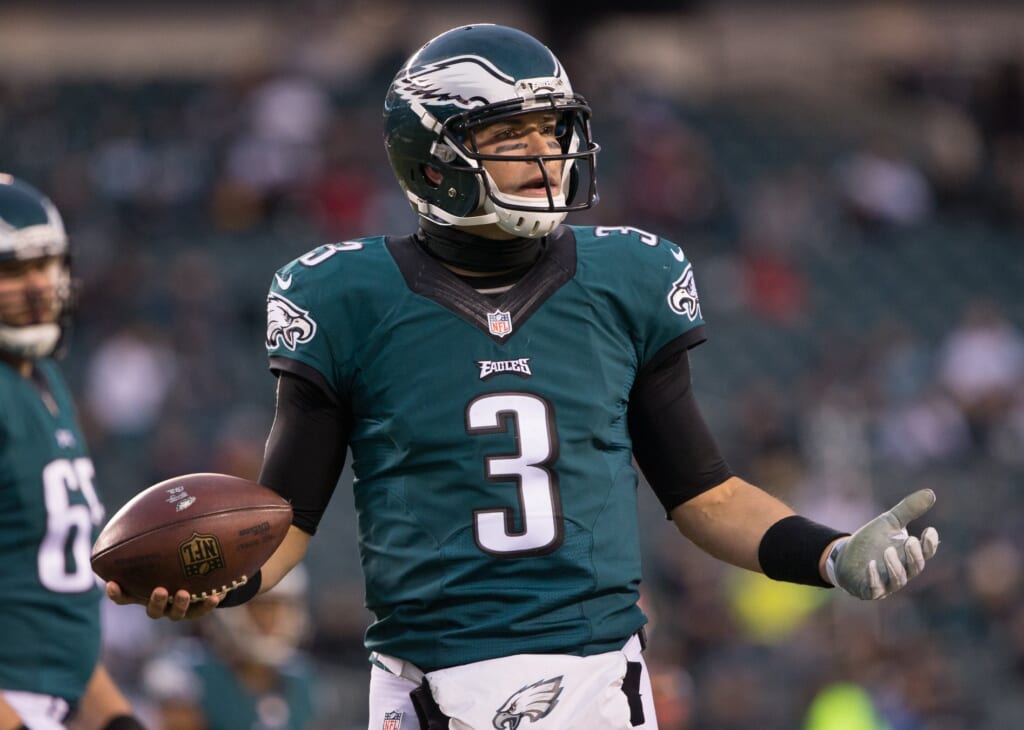 Most of the options above are not starter-caliber quarterbacks for a championship level team. That’s the risk Denver took when it decided to stop short of ponying up the cash to retain Osweiler.

If that’s the case, then the other options that might be available should pretty much be taken with a grain of salt.

If the Los Angeles Rams were to land Robert Griffin III, it’s possible that they might then look to trade Nick Foles.

In Philadelphia, the Eagles have a backup quarterback in Mark Sanchez that will likely find himself on the trade block after the team signed Chase Daniel on Wednesday. Heck, Philadelphia may look to trade the recently signed Sam Bradford after inking Daniel.

Outside of this, there really aren’t any logical options for the Broncos. That’s the harsh reality of the situation.