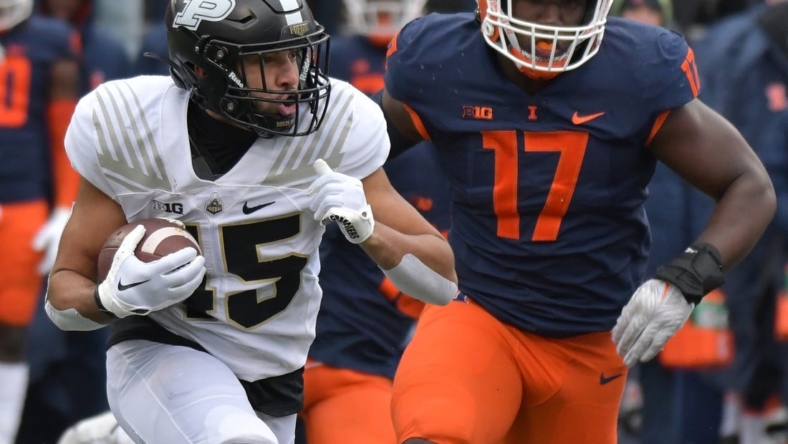 Aidan O’Connell connected with Payne Durham for a pair of touchdowns, including the decisive score, as Purdue upset No. 21 Illinois 31-24 on Saturday in Champaign, Ill.

O’Connell finished with 237 yards and three touchdowns on 25-for-40 passing, while Durham hauled in seven of those completions for 70 yards. Devin Mockobee added a rushing touchdown and gained 106 yards on 28 carries.

Purdue took a 28-21 lead early in the fourth when O’Connell found Durham in the end zone from 12 yards out. Kieren Douglas intercepted Illinois quarterback Tommy DeVito just under 10 minutes later, and Mitchell Fineran made good on a 25-yard field goal to secure the victory.

DeVito completed 18 of 32 passes for 201 yards with a touchdown and an interception. Chase Brown rushed for 98 yards and two TDs on 23 carries, snapping a streak in which he had went for over 100 yards on the ground in 10 straight games.

Brown also exited the game with 22 seconds remaining with what appeared to be a serious leg injury.

The Boilermakers went ahead for the first time at the 6:57 mark of the third, closing a 12-play, 90-yard drive with O’Connell’s 5-yard scoring strike to Durham, who made a leaping grab in the back left corner of the end zone.

That advantage didn’t last long, though, as DeVito threw a 5-yard TD pass of his own to Brian Hightower on Illinois’ ensuing possession.

Devon Witherspoon intercepted O’Connell with just under two minutes left before halftime, but the pick was negated due to a defensive pass interference call on Witherspoon. O’Connell made the Fighting Illini pay immediately, connecting with Charlie Jones for a 32-yard touchdown on the next play to go into the break tied 14-all.

It took just six plays for Illinois to move 74 yards on its first drive of the game, and Brown capped the march with a 2-yard rushing TD for a 7-0 lead.