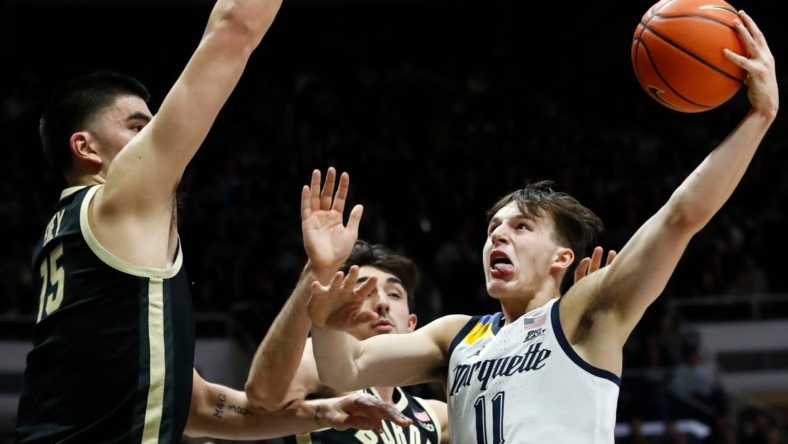 Zach Edey scored 14 of his 20 points in the second half and grabbed 13 rebounds to lead Purdue to a 75-70 victory over Marquette on Tuesday night in West Lafayette, Ind.

Braden Smith also had 20 points and stepped up in the second half, scoring 15 points for the Boilermakers (3-0).

The game, which featured 13 lead changes and six ties, was part of the Gavitt Tipoff Games held annually since 2015 between teams from the Big Ten and Big East conferences.

Marquette (2-1) led 58-49 with 9:54 left in the second half before Purdue changed the momentum of the game by finding Edey more efficiently inside.

Smith scored eight points during a 12-0 run that put the Boilermakers ahead 71-62 with 47 seconds left.

The Golden Eagles went cold shooting down the stretch as they made only 1 of 15 shots during a seven-minute stretch until Kam Jones hit a 3-pointer with 25 seconds left.

Marquette’s David Joplin scored all of his game-high 21 points in the second half, including a trey with 13 seconds left to cut the deficit to 72-68. After Smith made one of two free throws, Joplin was fouled while shooting another 3-point attempt with eight seconds to go. He made two of three free throws to pull Marquette within three points.

Purdue’s Ethan Morton hit a pair of free throws to seal the game.

David Jenkins Jr. scored 10 points for Purdue, which led for less than nine minutes of the game.

Purdue is off until Nov. 24 when it takes on West Virginia in the Phil Knight Legacy tournament in Portland, Ore. Marquette will face Long Island on Thursday in Milwaukee.