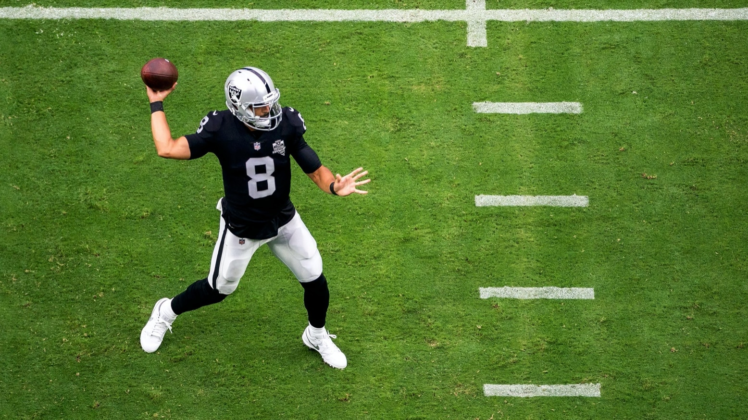 For many in the “Derek Carr isn’t good enough” camp, the arrival of Marcus Mariota to the Las Vegas Raiders signified what they thought was a bonafide quarterback competition. As it turns out, nothing could be further from the truth

When the Las Vegas Raiders made Marcus Mariota the highest-paid backup quarterback, eyebrows went up, whispers around discussion circles questioned whether Derek Carr would finish the season under center. Blogs, analysts and talking heads went wild on the possibility that the Silver and Black would make a switch at the position. They waited for Raiders training camp to start and tried to force the narrative.

Apparently, Marcus Mariota isn’t ready for that opportunity, yet. In fact, he’s not even close, which shouldn’t alarm or surprise anyone.

That’s not an insult to Mariota. He’s coming off ankle surgery and just lost his starting job to Ryan Tannehill last year. In media circles, some believed that Carr would lose his job to Mariota in a similar fashion during Raiders training camp.

Head coach Jon Gruden put out some fresh meat for everyone who enjoys a little quarterback controversy to chomp on when he called Marcus Mariota a “dazzling playmaker” during a recent media presser.

“He took off a couple times that fired me up,” Gruden said. “It looks like the ankle really turned the corner. He’s a dazzling playmaker with his feet. That is the key to his game. I saw glimpses of that today and it was exciting. He had a nice day.”

Sports rabble-rousers ate that quote up—feasted on it like the first meal on Thanksgiving Day. Even some of the most well-respected NFL analysts had to pause when they saw Gruden’s words on the Twitter timeline:

And then, reality struck but that didn’t create the same shockwaves. Beat writers detailed the full picture of Mariota at practice.

This isn’t a surprise for multiple reasons. Back in Tennessee, Mariota had some uninspiring practices while entrenched as a starter. Following an injury without on-field OTAs with a new group of pass-catchers, how is it possible for him to look sharp in his first few sessions? Of course, he’s going to struggle this early.

If you consider Marcus Mariota’s injury, Carr’s familiarity within the offense in his third year under Gruden, the absence of spring practices and no preseason, we cannot possibly believe Mariota takes over in the first half of the season unless the starter suffers an injury.

However, this isn’t just a case of early kinks to work out. According to Vincent Bonsignore of the Las Vegas Review-Journal and Raider Nation Radio, Gruden wants to tweak Mariota’s fundamentals a bit, which suggests a more extensive fix.

Somehow that tweet didn’t make its rounds around social media and sports blogs like Gruden’s “dazzling playmaker” comment. Why? Perhaps those who pushed the narrative that Carr would go into the season on a very short leash would have to put that sports take to bed.

If you consider Mariota’s injury, Carr’s familiarity within the offense in his third year under Gruden, the absence of spring practices and no preseason, we cannot possibly believe Mariota takes over in the first half of the season unless the starter suffers an injury.

Some writers circled the Raiders’ Week 6 bye as a time to potentially swap out Carr for Mariota if the team struggles to win games.

Barring the look of a lifeless offense, why would Gruden go to the bullpen five games into the season? So much can happen in 11 contests, especially this year with COVID-19 likely a factor in player availability.

If you believe this is a make-or-break year for Carr, he needs more than five games with a solid pass-catching group for a proper evaluation. Wouldn’t you want to dissect his performance in at least one cold-weather game for a test in those conditions? We probably won’t see that until Week 13 against the New York Jets in the Meadowlands on December 6th.

Although Carr needs legitimate competition to ensure he’s not too comfortable and feels untouchable, Mariota isn’t in a position to push him at this point. Vic Tafur of The Athletic made the distinction between the two crystal clear Monday.

“Carr has been very sharp (Marcus Mariota is no threat at this point),” Tafur wrote.

This isn’t a time to view Mariota as a wasted signing either. He has another year left on his deal (without guarantees).

Based on Gruden’s comment about “tweaking” Mariota’s fundamentals, and the 26-year-old’s understanding that it’s “Derek’s team,” the Raiders signed a quarterback that needs to sharpen his skill set before he sees the field for meaningful snaps.

Yes, in the playoffs, Mariota beat the Kansas City Chiefs in stunning fashion at Arrowhead Stadium—something Carr has yet to accomplish. However, he’s not the same player equipped to pull that off right now, not coming off an injury in his first year with a new team.

As for us media types, we need to stop pumping life into and giving credence to unsubstantiated takes that suggest Mariota is breathing down Carr’s neck for the starting spot this early—the reality is quite the opposite.

We cannot doubt that Gruden loves Mariota’s ability to scramble and create with his legs, that’s something he does a lot better than Carr, but a quarterback’s primary job entails throwing the ball downfield. In five seasons, Mariota has only thrown for more than 19 touchdowns once. His completion rate dropped from 68.9 to 59.4 percent over the last two seasons.

In a setting similar to the Raiders, with a stout offensive line, a versatile pass-catching group, and a solid ground attack, Marcus Mariota could flourish. He’ll turn 27 years old in October, so the Oregon product can still bounce back with a bright future.

Nonetheless, Gruden would be shortsighted to insert Mariota into the starting lineup before he’s comfortable in the offense without even playing a full game since the Titans benched him last October.

This year, we’ll find out if Carr is the guy when he has sufficient weapons around him. The Raiders have enough depth to fill wideout Tyrell Williams’ void if he misses time with a torn labrum in his shoulder—an injury NFL Network’s Ian Rapoport reported Monday.

We can revisit the conversation about Marcus Mariota after Raiders training camp and, more appropriately, at the end of the season—after Carr has had a sufficient chance to answer those who, in his opinion, have disrespected him.

As for us media types, we need to stop pumping life into and giving credence to unsubstantiated takes that suggest Mariota is breathing down Carr’s neck for the starting spot this early—the reality is quite the opposite.

As Raiders training camp has proven over and over again the past two weeks, it’s Derek Carr’s job.