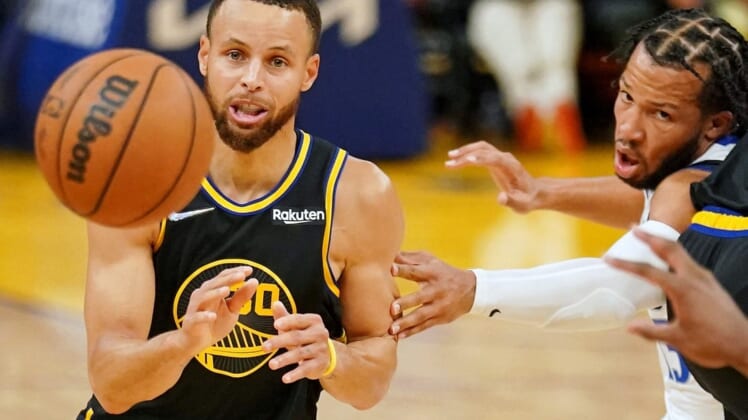 The Golden State Warriors are being heavily backed at most sportsbooks to win their fourth NBA title since 2015 ahead of Game 1 against the Boston Celtics on Thursday.

And their sharp-shooting star is the prohibitive favorite to finally claim NBA Finals MVP honors.

The Warriors are -159 favorites in the series at BetRivers, where they account for 19.2 percent of the remaining championship futures money. That’s the most of any playoff team, and the sportsbook reported the 16.3 percent of the total championship bets backing Golden State is second-most.

The most action on the series outcome has been Golden State winning in six games. That has drawn 51 percent of the handle at +500 at BetRivers.

Boston has been backed by 15 percent of bettors and 8.8 percent of the outright title action, respectively.

The story is similar at PointsBet, where the Warriors have been backed by 87 percent of the handle and 67 percent of the bets at -160 entering the series. They opened the season at +1100 and were being offered at +800 when the playoffs began.

The Celtics opened the season at +3400 at PointsBet and were also +800 when the postseason started. They enter Game 1 as +130 longshots.

That could finally change this year with Curry the favorite at all major regulated sportsbooks.

Curry is the -110 favorite at BetMGM, where he leads with 41.5 percent of the handle and 22.3 percent of the total bets backing him. That’s ahead of Celtics star Jayson Tatum, who has drawn 15.9 and 12.5 percent, respectively, at +180. No other player has shorter odds than the +1200 that Boston’s Jaylen Brown is being offered at.

The Celtics’ Marcus Smart, the NBA’s Defensive Player of the Year, carries longshot odds at +4000 and is second at the sportsbook with 21.6 percent of the bets backing him.