Public backing Baylor to beat Gonzaga for the 2021 NCAA Championship 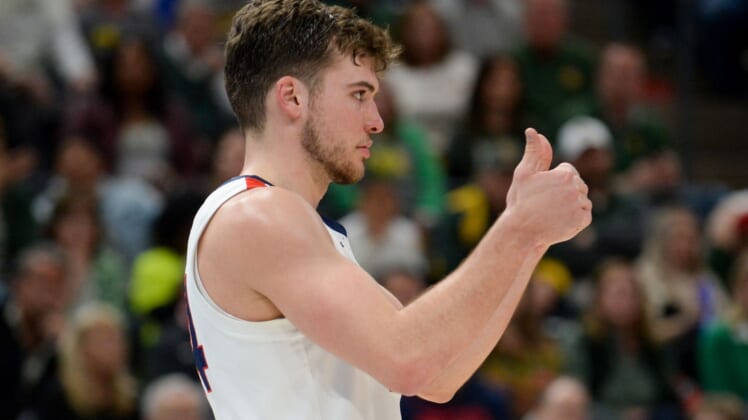 Mar 23, 2019; Salt Lake City, UT, USA; Gonzaga Bulldogs forward Corey Kispert (24) during the second half in the second round of the 2019 NCAA Tournament against the Baylor Bears at Vivint Smart Home Arena. Mandatory Credit: Gary A. Vasquez-USA TODAY Sports

A marquee worthy grand finale to the 2021 NCAA Tournament features undefeated Gonzaga and the team pegged as the Bulldogs’ bridesmaid all season.

Baylor, the No. 2-ranked team in the Top 25 most of the season, gets to take a swing at perfect Gonzaga for the national championship Monday night.

Sportsbooks are lining up unique markets and offers to entice interest from fans, including DraftKings allowing bettors to take the 4.5-point favorite Gonzaga as 4.5-point underdogs. The minimum bet is just $1, but an opt-in and deposit is required.

The Baylor moneyline was the public’s favorite bet on the game’s outcome as of Monday morning, with 62 percent going with the Bears +155 to win the game outright.

Only about 50 percent of the betting public is betting on Gonzaga to cover as of Noon ET on Monday.

Prop bets are not available on player performance during most college basketball games, but the NCAA title game is an exception.

For example, Gonzaga’s Drew Timme is being offered at -110 to have more than 31.5 combined points, rebounds and assists. Head coach Mark Few said Timme is often the best passer on the court, and his size is already a concern for Baylor. Note Timme also went over the 20.5 point total set for him in the national semifinal win over UCLA.

Baylor’s Davion Mitchell was listed at 5.5 for the over-under on his assist total by PointsBet at +105. Mitchell averaged 5.5 assists per game this season. He had 12 points and 11 assists against Houston, went for 12 and six, respectively, versus Arkansas and 16 and eight against Wisconsin.

Multiple books are offering close to even odds on a combined 3-point field goals with an over-under of 17.5.

Baylor shot 41.1 percent from 3-point range and averaged 9.9 3-pointers per game this season, and Gonzaga lines the court with five players willing to pull the trigger. The combined 3-point total went over in both semifinal games.