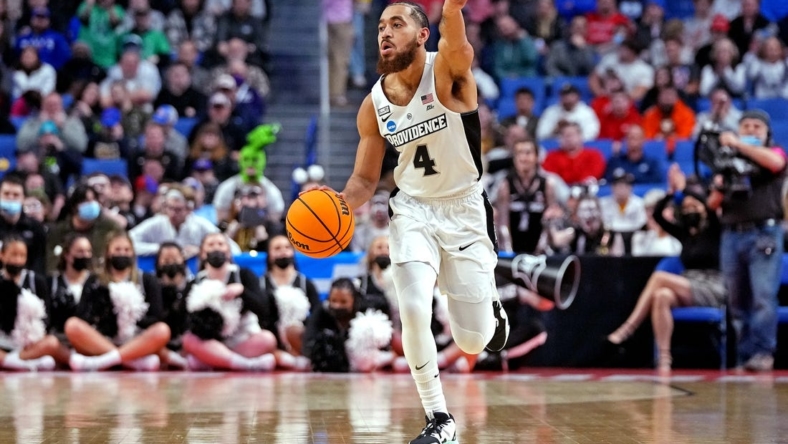 Providence hosts a new Division I opponent on Tuesday as Stonehill makes the quick trip to Rhode Island’s capital city.

The Friars (2-0) will close a three-game homestand against coach Ed Cooley’s alma mater after downing Northeastern 89-65 on Saturday.

Guard Jared Bynum had a game-high 21 points and nine assists to lead Providence, which used a 20-3 run in the second half to take control.

“I thought Jared Bynum became Superman in the second half,” Cooley said. “That’s what first-team all-conference players do, they lead the right way.”

Cooley is happy with the contributions from both newcomers and veterans, but there is plenty to improve upon before tougher challenges at the Basketball Hall of Fame Tip-Off this weekend.

“We’re still trying to figure our team out,” Cooley said. “It’s one game at a time. We’ve got a long way to go. We’re just a work in progress trying to improve, trying to build an identity and a chemistry.”

The Friars are 81-5 in nonconference home games under Cooley.

A Northeast Conference newcomer, Stonehill (1-2) started a six-game road trip with its first-ever victory as a Division I program, 82-77 against Army on Saturday at West Point.

Andrew Sims scored 21 points and Isaiah Burnett had 19. Sims has at least 21 points in back-to-back games.

“We talked about competing and leaving it all out there for 40 minutes and that’s what it took to get the win,” Stonehill coach Chris Kraus said. “It took our group to be tough and together to win at such a prestigious place like West Point.”

The Skyhawks opened the season with an 85-54 loss at UConn and also play at Boston College before the start of the conference schedule.

Though Providence and Stonehill haven’t played a regular-season game since 1979, they played in several exhibitions, including a 95-71 Friars’ victory on Oct. 21, 2021.

Cooley is a Stonehill Hall of Famer, 1994 graduate and three-time captain. The school is located in Easton, Mass., less than an hour from Providence.