Hours before the Roger Federer last match extravaganza kicked off at the 2022 Laver Cup, an eventgoer took to the court and stunningly set their arm on fire in what was reportedly in protest of climate change.

The focus of the tennis world is currently on London as sports legend Roger Federer is set to take part in what will be the final match of a long and storied career. The 20-time Grand Slam winner announced his decision to call it a career last week and informed the world on social media that the 2022 Laver Cup would be the location for his last professional match.

Related: Find out why a woman glued her hand to the floor at Timberwolves NBA play-in game

Federer’s pro finale will be a doubles match with fellow legend Rafael Nadal on Friday. However, earlier in the day the doubles game was removed from the day’s spotlight when a protestor took center stage to bring attention to the issue of climate change by shockingly setting their arm on fire.

During a match between Stefanos Tsitsipas and Diego Schwartzman, a climate change activist took to the court for the event inside London, England’s O2 Arena to make a very painful statement on their reported dissatisfaction with the United Kingdom’s use of private jets. The incident did not last very long and the protestor rubbed the fire off his arm soon after setting it ablaze. You can watch footage of the alarming moment above.

Following the protest, the Daily Mail reported that the man involved in the wild incident is a 20-year-old activist named Kai that had recently made several social media posts bashing the UK government for allowing the use of private jets. He is allegedly a member of the anti-private airplane group known as End UK Private Jets. 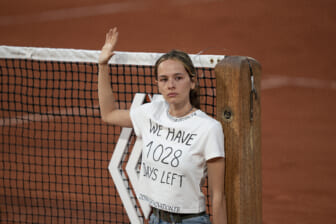 Also Read:
WATCH: Protestor at French Open ties herself to net during a semifinal match

This is just the latest protest at a major sporting event over the last six months. This year’s NBA playoffs were hit with several on-court protests, including one woman attempting to glue her hands to the court. And in June, a woman attached herself to the playing net at the French Open to also protest the issue of climate change.