Anthem Protest Not Good for Fans nor Business 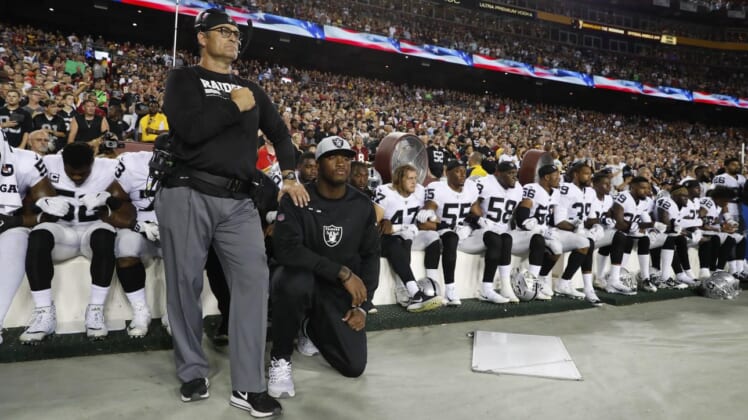 The NFL weekend was hijacked by mass social activism with yesterday’s anthem protest. While that may make the players feel good about what they’re doing, fans, so far, feel much differently.

Week 3 of the 2017 NFL season will forever be remembered for the feats of social activism and not the play – good or bad – on the field. When players and owners decided to make the weekend a political statement – by sitting, kneeling, or not being present for the anthem – rather than about their product, that’s what happens.

I don’t pen this column as a way to pass judgment on whether or not those kneeling during the national anthem – nor staying in the locker room – are right or wrong. We all make choices on whether or not to voice our opinions on a multitude of issues, and that’s all fine and dandy. And we have to face the consequences for our speaking out.

Yet, yesterday went far beyond individual expressions of freedom. What Colin Kaepernick may have started, has morphed into something completely different all together. Yesterday’s en masse display made a bold statement: the NFL, its leadership, its owners, and its players, feel protesting by kneeling during the National Anthem is the way to call attention to a slate of moral and societal issues. They’ve made a business decision to make politics (at the least social justice) an officially sanctioned mantle for the league.

That’s where I think they’ve made a big mistake.

Oh, and they still haven’t given free-agent Kaepernick a shot at making a roster.

Local plumbers, teachers, white-collar executives – lower income to upper income – all put aside the day-to-day tribulations of their respective lives to join together to root their team to victory. Now, that is in danger as the polarization of national politics has come front and center to NFL fandom.

The Raiders, and owner Mark Davis, jumped on the protest train as well. The Raiders, who have a long and distinguished history of civil rights support, spent a significant amount of time leading up to the Washington game planning and discussing their form of protest. As some, including NBC Sunday Night Football personality Al Michaels, have surmised, perhaps the Raiders focus on off-the-field concerns led to their poor performance on the field in a 27-10 loss on the road to the Redskins. There’s no way to know for sure.

Were there teams who protested that won yesterday? Sure. But those who were in the lead on it – Pittsburgh, Baltimore, and others – suffered the loss on the field, even if they felt united off it.

Member of the Washington Redskins stand arm in arm during the playing of the National Anthem before an NFL football game against the Oakland Raiders in Landover, Md., Sunday, Sept. 24, 2017. (AP Photo/Pablo Martinez Monsivais)

Of course, some of this mass display was brought about by statements made by President Donald Trump over the weekend. As he does so well, he triggered yet another group with his bombastic rhetoric. Instead of dismissing it, it galvanized the millionaire’s club that is the NFL. In many ways, they gave more power to the pandering statements made by Trump.

For most, the NFL and rallying behind your hometown team is a unifying effort. Local plumbers, teachers, white-collar executives – lower income to upper income – all put aside the day-to-day tribulations of their respective lives to join together to root their team to victory. Now, that is in danger as the polarization of national politics has come front and center to NFL fandom.

A sample of three national sports radio talk shows this morning (ESPN, Fox Sports), for a total of three hours, showed overwhelmingly fans were not happy with the display. That doesn’t invalidate the concerns many of these player/activists have but it shows people like their football sans the politics.

“I work hard, struggle to make ends meet for my family, and Sunday NFL football has always been my escape,” said caller Jay on ESPN this afternoon. “It’s not the news, it’s not the crap happening in DC – it’s football and it’s my great escape. Yesterday, I had to hear politics in the pregame show, politics during the game, politics after the game. I’m done. Can’t we have anything that doesn’t divide everyone?”

This caller’s sentiment was heard over and over again, all morning. I am sure those that support the protest are out there and speaking up too. It’s tough to deny that – again, from a pure business point of view – the NFL fumbled yesterday. Having individual players expressing themselves is one thing. But the moment a family entertainment business gets into the political statement game, you’re going to alienate your core customers.

The NFL’s move to institutionalize political statements is bad for its business and bad for its product. Will it hurt them? That remains to be seen. It could be short-lived outrage.

Still, if many of the NFL players want to bring much-needed attention to issues like poverty, racial inequality, police brutality, domestic abuse, and mental illness – they have a great platform to do it. People love their professional football and it seems to me there are more substantive and meaningful ways they can work with the league to do good in their communities.