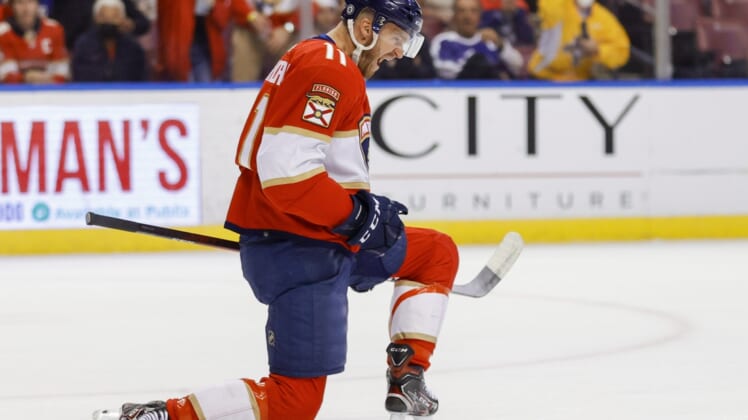 The Montreal Canadiens scored none.

The Panthers have the most home wins in the NHL (16-3-0), and they are a top-four team in the league overall.

The Canadiens have the worst road record in the NHL (2-12-3), and they are last in the Eastern Conference with 18 points.

Saturday afternoon’s home game for the Panthers against the Canadiens appears to be a lopsided matchup. That’s weird in a way because Montreal is an NHL blueblood with a league-record 24 Stanley Cup titles and a trip to the Finals as recently as last season. The Canadiens are also the league’s oldest franchise, dating to 1909, with a devoted fan base.

The Panthers, meanwhile, have never won a Stanley Cup. They’re a relatively new franchise, founded in 1993, and their fans often fail to pack their arena.

Things could be changing, however, as the Panthers embarrassed the two-time reigning Stanley Cup champion Tampa Bay Lightning 9-3 on Thursday.

Panthers fans chanted “We want 10” during the final period, hoping to tie the franchise record for goals. The failure to reach double digits was their only disappointment.

“(The Lightning) were missing guys,” Panthers winger Jonathan Huberdeau said of Tampa Bay, which played without its top two goalies due to COVID protocols. “But we focused on our team.”

Huberdeau, who had one goal and four assists, tied his career high with five points. It was his fourth game with five points since he broke into the NHL in 2012. Since that time, only two players — Edmonton’s Connor McDavid (seven) and Boston’s Brad Marchand (five) — had more five-point games.

Rookie goalie Spencer Knight beat Tampa Bay for the second time in two tries this season, but the Panthers are expected to return to starter Sergei Bobrovsky on Saturday. Bobrovsky is 13-3-2 with a 2.49 goals-against average and a .917 save percentage.

Huberdeau leads Florida in points (38) and assists (27), and the Panthers have three double-figure goal-scorers: Anthony Duclair (12), Huberdeau (11) and Aleksander Barkov (11).

Montreal, which has yet to face Florida this season, has lost five straight road games. The Canadiens have not won a road game in more than a month, Nov. 27 to be exact.

Since Saturday’s game will be played on New Year’s Day, perhaps the 2022 portion of the 2021-22 schedule will bring better luck to the Canadiens, who have played the entire season without star goalie Carey Price (knee injury).

Former Panthers goalie Sam Montembeault has been in the net the past two games for Montreal, and he is 1-5-2 with a 3.85 goals-against average and an .893 save percentage this season.

Entering Thursday’s game against Carolina, Montreal had 13 players on its COVID-19 protocol list, including another goalie, Cayden Primeau.

In addition, Brendan Gallagher (10 points) left after Thursday’s second period due to an upper-body injury. He is day to day.

“Jonathan didn’t feel well before the game,” Ducharme said. “He had a rapid test for COVID, and that was negative.

“He took his warmups, but he didn’t have any energy. We’re hoping he’s going to be OK for (Florida).”