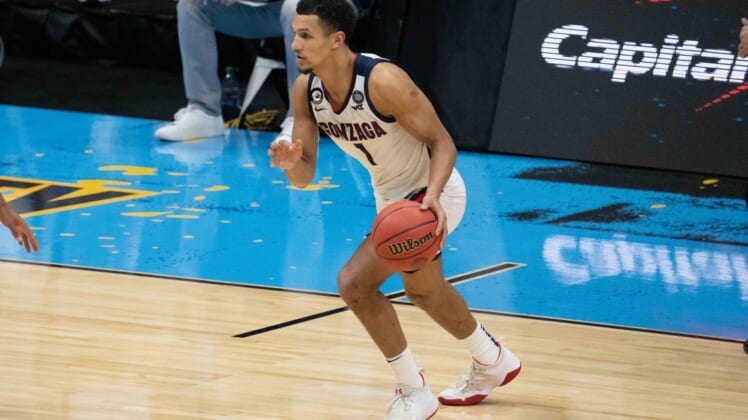 April 5, 2021; Indianapolis, IN, USA; Gonzaga Bulldogs guard Jalen Suggs (1) in the second half during the national championship game in the Final Four of the 2021 NCAA Tournament against the Baylor Bears at Lucas Oil Stadium. Mandatory Credit: Kyle Terada-USA TODAY Sports

Suggs, widely projected to be one of the top picks in the draft July 29, will be best remembered by college basketball fans for his long-range, overtime buzzer-beater in the Final Four to deliver Gonzaga a 93-90 win over UCLA and advance to the NCAA title game.

In conjunction with his draft declaration, Suggs announced he is auctioning off a one-of-one NFT (nonfungible token) commemorating the shot, along with his signed, game-worn shoes from Gonzaga’s win.

This moment was just the beginning. As I officially turn pro, The Shot is now a 1-of-1 NFT, accompanied by my signed, game-worn shoes from the semis. The auction is live now on @opensea: https://t.co/YAQrBdnPVH pic.twitter.com/lHGzZUO1bc

In his lone season with the Bulldogs, Suggs started all 30 games he played and averaged 14.4 points, 5.3 rebounds, 4.5 assists and 1.9 steals per game. Gonzaga finished 31-1 but lost to Baylor in the championship game.

Suggs’ announcement came on the same day that the No. 1 prospect in the Class of 2021, 7-1 center Chet Holmgren, committed to Gonzaga.