A buffet of talent and depth encapsulates the free agent market for running backs in 2015. Teams who are searching for either top-level talent or a body to fill out a depth chart will have their pick of the free agent litter. From NFL’s leading rusher in 2014 to aging veterans and roster hopefuls, variety and value is the theme of this season’s free agent class.

The best back on the market, Demarco Murray, will likely be the first domino to fall. Secondary-talent will wait to see Murray’s price to set their own. So where will the best of the rest fall in this tumultuous period? 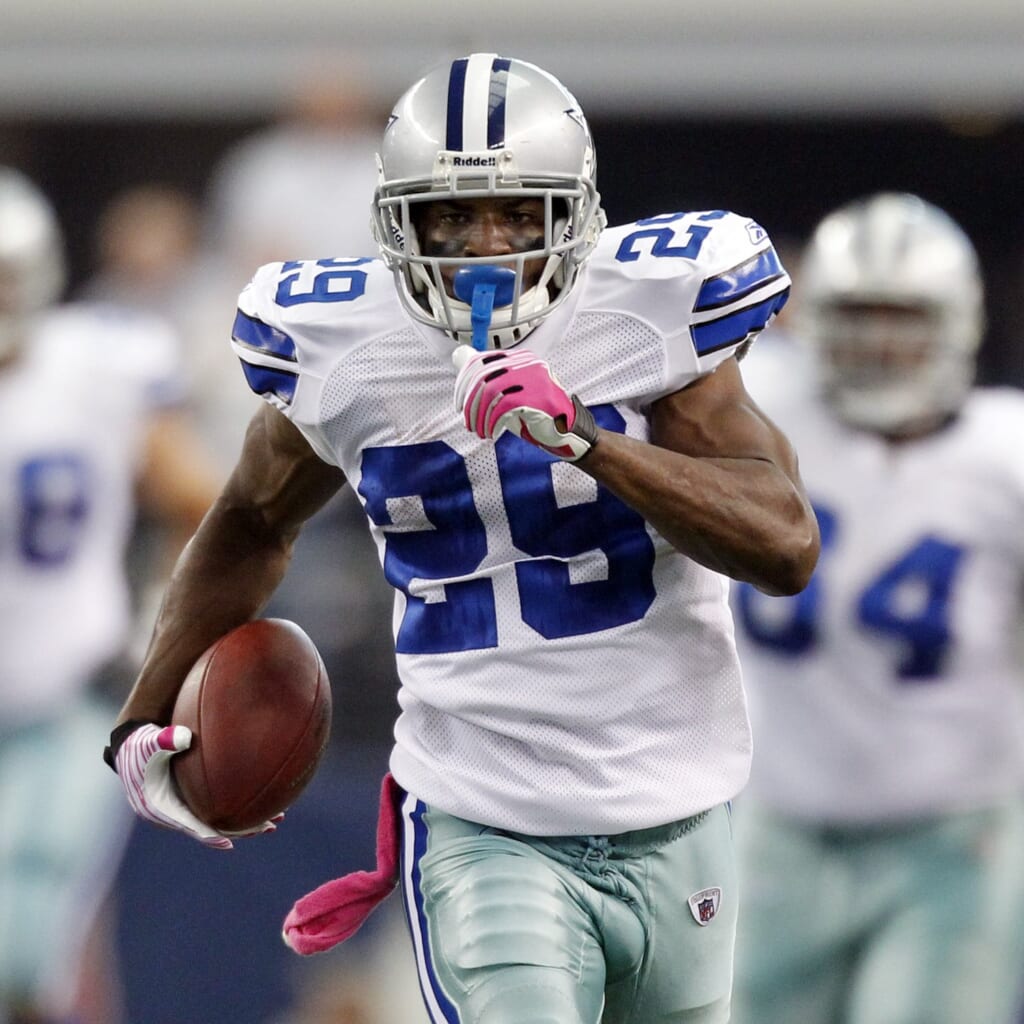 Coming off the best season of his career, Murray led the NFL with 1,845 yards in 2014. At 27 years of age and fresh off a career year, Murray will be looking to cash in big time. With the 2015 salary cap expected to come in between $140-$143 million, the Cowboys now have the room to tender both of their high-dollar free agents, Murray and Dez Bryant. A month ago, Murray’s return to Dallas seemed bleak, but with $17.2 million in cap space, the Cowboys are now the front-runners to keep both of their elite weapons on offense. Despite having 23 free agents to tender, Dallas has made keeping its superstars the team’s primary focal point in the annual spending frenzy that is free agency.

Despite gaining 1,103 yards in 2014, the ageless wonder will not earn near the $6.5 million he made last year. Gore has been the face of the San Francisco 49ers for nearly a decade, and rumors out of the bay area indicate Gore would like to return to his team for another go. While the 31 year old would certainly play second-fiddle behind second-year back Carlos Hyde, the 49ers could do much worse than retaining Gore as a veteran backup. Expect Gore to return in 2015 in hopes of finishing his borderline Hall of Fame career on the same team he started it with back in 2005.

The man they call CJ2K has not reached the 2,000-yard plateau since 2009, but has broken the 1,000-yard mark in six of his seven professional seasons. At 29, many wonder what the speedster has left in the tank, and thus Johnson will likely be relegated to a supporting role should he find a suitor for the 2015 season. The Detroit Lions are likely to part with third-down back Reggie Bush due to their need to re-sign defensive tackle Ndamukong Suh. With $15.8 million to play with, Johnson could be a cheap option to fill the team’s need for an elusive back.

Escaping the chains of Sean Payton’s running back by committee system, Ingram hits the open market after his first Pro-Bowl caliber season. Despite the Belichickian usage of running backs Payton employs, Ingram was able to rush for 984 yards and nine touchdowns in just 13 games this past season. At just 25 years old, Ingram is the best value on the open market in terms of talent level and affordability. Ingram will not come cheap, nor will he garner the financial attention of say, Demarco Murray.

The Saints running back is ready to be handed the keys to a kingdom, and the Jacksonville Jaguars could be the team to do just that. Boasting $60 million in cap space, the Jaguars would do well to pair Ingram with Denard Robinson. Ingram would benefit from added work between the tackles, where Robinson would spread the field. With money to spend, Jacksonville must consider enabling this two-headed monster to take form behind young signal caller Blake Bortles. 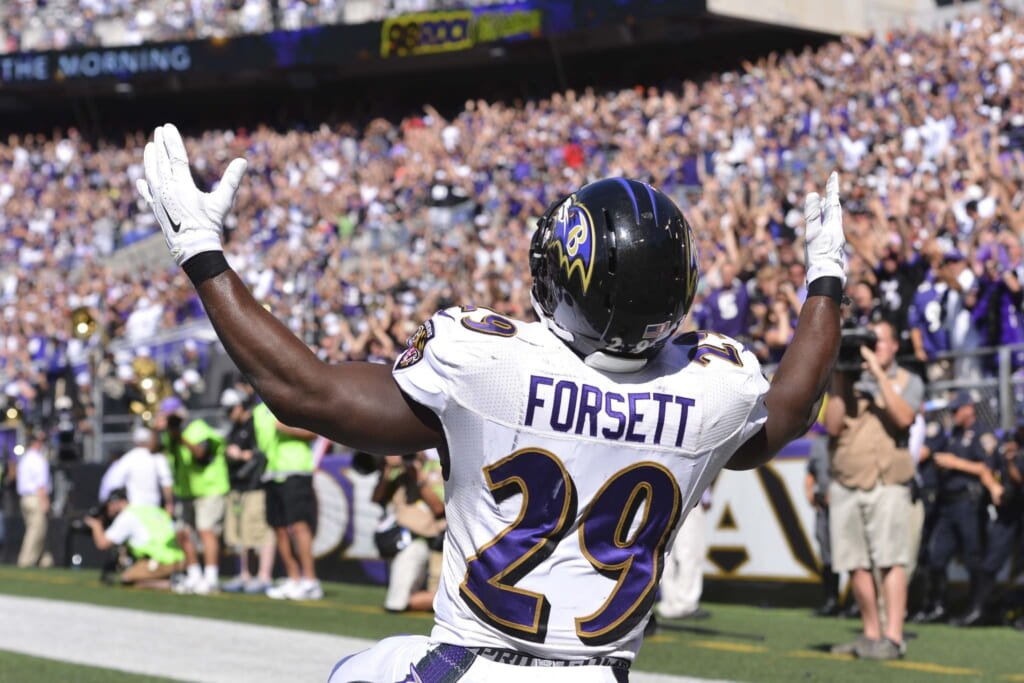 Fresh off a career season that saw him tally 1,270 rushing yards and eight touchdowns, Forsett will be a nice little value on the open market. At 29 years old, he might be a bit long in the tooth. However, the former Cal standout has only put up 582 rush attempts in his career. He’s now entering free agency looking for that first (and last) big payday.

New Denver Broncos head coach Gary Kubiak is the man responsible for Forsett’s coming of age in Baltimore. His zone-blocking scheme also seems to fit the veteran running back a great deal. With questions surrounding C.J. Anderson and Montee Ball as long-term options, the Broncos may indeed be in the market for a veteran. With $26.7 million in cap space, this is a move the team might just want to make.

An unknown name to most prior to the Indianapolis Colts’ playoff run, Herron is a 25-year-old halfback with excellent receiving skills out of the backfield. Cheaper than other pedestrian options on the market, Herron is an ideal fit for a contender in need without the dollars to match the demand. The New England Patriots are currently $5 million over the cap, so re-signing Vereen and free agent cornerback Darrell Revis is likely out of the question. Thus, Herron would fill a need for cheap, simultaneously providing them with financial freedom to target other positions of need.

This 27-year-old former first-round pick could very well be on his way out of San Diego. Due to Branden Oliver’s play in his absence and greater team needs elsewhere, San Diego is likely to move on from their franchise running back. Health has been the long-term issue for Mathews, as he has played a full slate of games just once in his five-year career. Nonetheless, Mathews is a valuable talent and has proven he can fill the role of a feature back at the professional level. He has broken the 1,000-yard plateau twice in his career.

Mathews’ age and injury concerns will make him a mid-level value on the market, an ideal target for a rebuilding team. While the Tennessee Titans selected Bishop Sankey in the 2014 NFL Draft, there has been no indication from the Titans nor Sankey that he is the future at halfback in Tennessee. With $41.5 million in cap space, Mathews could be an ideal fit in terms of both depth and veteran leadership at the running back position. 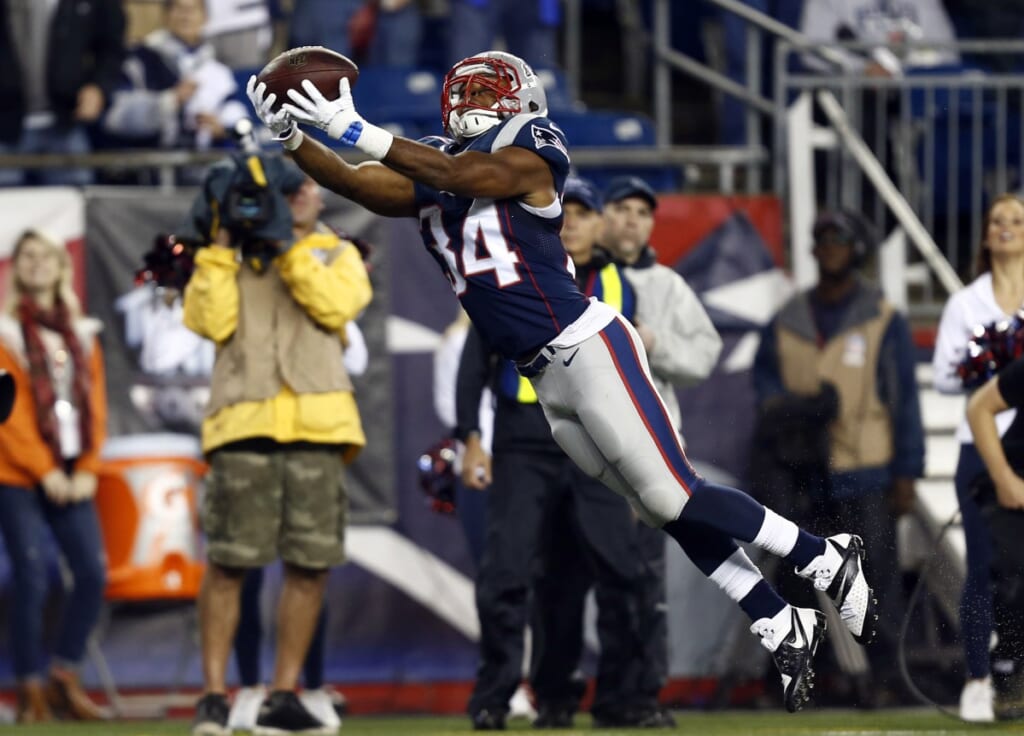 Likely out of New England due to its aforementioned financial issues, a running back with a very specific set of skills enters the open market. Vereen’s pass-catching ability is at an elite level among running backs. At just 25 years of age, Vereen put up 99 receptions and 874 yards over the last two seasons. This resume makes Vereen a target for contending teams looking to add versatility out of the backfield. Enter the Indianapolis Colts, who are reportedly looking to find a way to part with Trent Richardson. With $37.8 million to spend in free agency, the Colts have more than enough cash to throw at a third-down rusher such as Vereen. Andrew Luck depends on his running backs as safety valves, which makes this a match made in heaven. With the money to spend, Indianapolis will go after the best pass-catching back on the market.

With Rex Ryan taking over for Doug Marrone in Buffalo, a return to Western New York is possible for the overrated Spiller. With $30.9 million to spend in free agency, C.J. Spiller is likely to return to Buffalo as the starting running back back. Ryan-coached teams traditionally love to run the ball, and the coach himself has always had an eye for the offensive speedster— a trend emulated by his acquisitions of Percy Harvin and Chris Johnson over the past few years. Spiller was a former first-round pick in Buffalo, and will stay for the right price.

Yet another free agent rusher from the AFC East, Ridley missed most of 2014 with a torn ACL. However, do not count out the 26 year old from a resurgence. When healthy, Ridley has proven he can be a very effective volume-rusher. As the leading man on the ground in New England during the  2012 and 2013 seasons, Ridley amassed 2,036 yards and 19 touchdowns. A proven commodity that will come as a value, Ridley is a cheap option with a fair amount of upside during free agency. With $48.6 million in cap room. the Jets need both talent and depth at running back. Ridley could further-ignite a passion-fueled rivalry while switching to green and white this offseason.