The Pro Football Hall of Fame in Canton, Ohio, just put up a special gallery, filled with iconic artifacts from the 2020 NFL season that was so heavily impacted by the COVID-19 pandemic.

Jason Aikens, the Pro Football Hall of Fame’s curator, walks viewers through the exhibit dedicated to this past NFL season, as multiple pieces of COVID-related memorabilia are on display:

Really, we’re never going to see anything like this ever again, so it’s worth getting into some of the details.

Even in the thumbnail for the video above, you can see three coaches’ shirts. One belongs to the Detroit Lions’ Robert Prince, who was the first to be an interim coach because of a positive COVID-19 test, as Darrell Bevell was forced out of action in Week 16.

Also visible is a Cleveland Browns shirt and visor, worn by special teams coach Mike Priefer. He had to take over for Coach of the Year Kevin Stefanski in the Browns’ stunning playoff victory over the Pittsburgh Steelers.

The Kansas City Chiefs are also prominently featured here. Offensive lineman Laurent Duvernay-Tardif opted out of the 2020 campaign to work in a hospital in Canada during the pandemic, so you can see his hospital scrubs. Chiefs coach Andy Reid’s face shield can be glimpsed from the thumbnail, too. 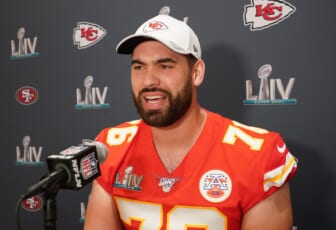 Some other fun trinkets: The iPhone Cincinnati Bengals quarterback Joe Burrow used on the evening where he was selected first overall in the 2020 NFL Draft, along with cue cards and an M&Ms jar from draft night used by NFL commissioner Roger Goodell.

Finally, sure to be a fun fact for years to come: Practice squad wide receiver Kendall Hinton was thrust into starting QB duties for the Denver Broncos due to COVID-19. The wristband Hinton wore on game day is a key piece of the Pro Football Hall of Fame’s 2020 tribute.

Another fantastic job by the folks at the Pro Football Hall of Fame, as the NFL managed to push through unfathomable circumstances and complete a full season.